Pizzo Monaco. An Islamic aghadir and the peasant strategies of subsistence in Sicily (Italy) | 2013

This paper shows the first results of the archaeological excavation at Pizzo Monaco (Custonaci, Trapani-Italy) thanks to the Max van Berchem Foundation support. Pizzo Monaco is an already known site that we had previously interpreted as a possible collective fortified granary dated in the Islamic period (10th-11th centuries). The site is a refuge place on the top of the calcareous peak of Pizzo Monaco. A trial excavation conducted in 2012 confirmed the high research potential of this settlement that was proposed to be a collective fortified granary (aghadir). The importance of the discovery is enormous, as it would be a unique case in Italy and the most ancient Islamic site of this kind in the western Mediterranean. 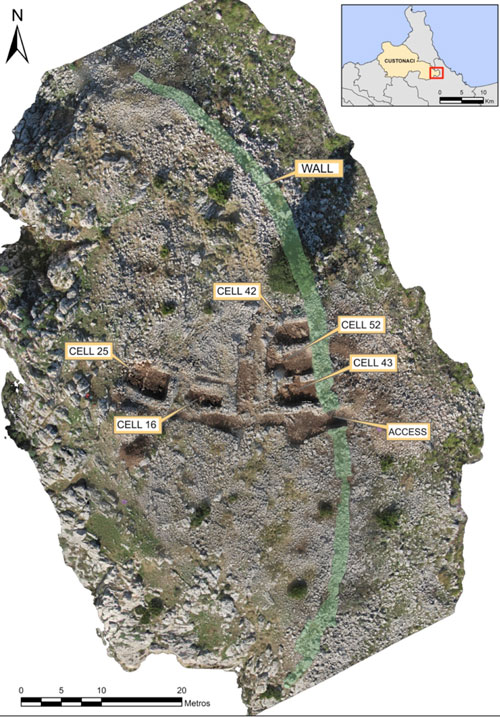 The research has also been supported by ARPATRA and MEMOLA projects (www.memolaproject.eu) and authorised by the Italian authorities Sopraintendenza ai Beni Culturali ed Ambientali della Provincia di Trapani. This joined effort allowed the increase of the initial objectives, excavation capacity, research and public impact. It also provided the opportunity to perform scientific analysis and sampling in the field, as well as the implementation of cultural and social activities that reached the local community, increasing the visibility of our work.

The excavation is part of a wider landscape analysis that will allow a better comprehension of the historical relationship between humans and nature, by applying a diachronic analysis of the main social changes that have taken place in Pizzo Monaco. We understand that the first Islamic period represents a key milestone for the interpretation of this relationship, representing a significant case study to contribute to Medieval Islamic Archaeology in the Mediterranean region. 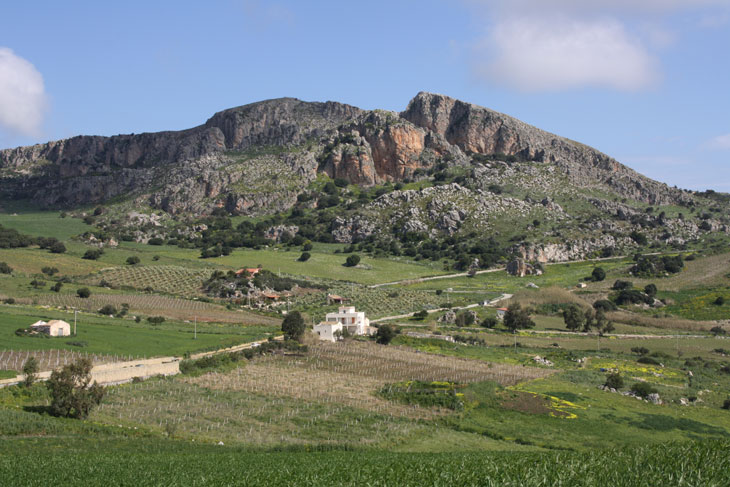 The intervention consisted in an extensive stratigraphical excavation of the aforementioned fortification in order to confirm the hypothesis of its identification as an aghadir, but also, trying to make an archaeobotanical and environmental analysis.

Our goal was to identify some historical topics corresponding to the Islamic period such as the material culture analysis (architecture, ceramic production, technical knowledge, etc.); peasant strategies for preserving means of subsistence; the internal social organisation; the organisation of work and accumulation processes; natural vegetation and agricultural production; the agro-pastoral system and its workflow; the process of Islamisation and Arabization, among others.

The fieldwork was carried out during October-November 20141. We are currently processing part of the samples obtained, including the archaeobotanical and chemical analysis, as well as soil studies and archaeological pottery data gathered during the excavation. 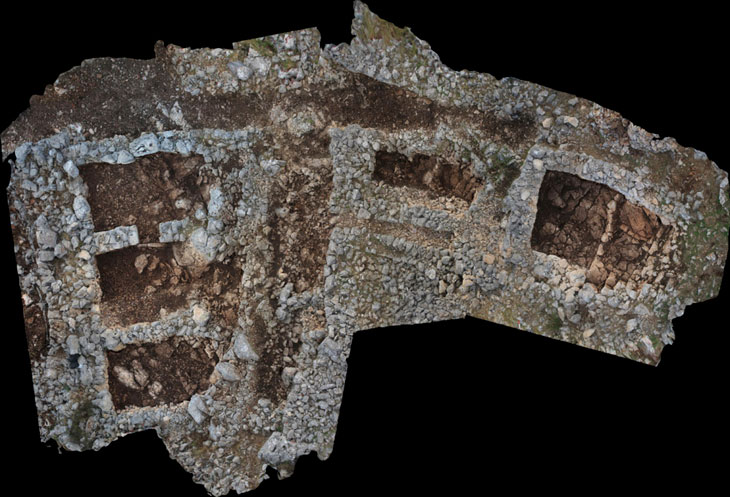 The research was coordinated by the University of Granada, scientific supervisor for the project, and carried out in collaboration with the following institutions:

Before digging, the botanists from the University of Palermo made a previous sample of natural vegetation inside and outside the site. This experiment has been very interesting to demonstrate the local influence of anthropic activity in biodiversity.

After that, the site was completely cleaned of vegetation before the excavation began so that we could complete an accurate graphic documentation with aerial pictures and a complete 3D photogrammetric model. 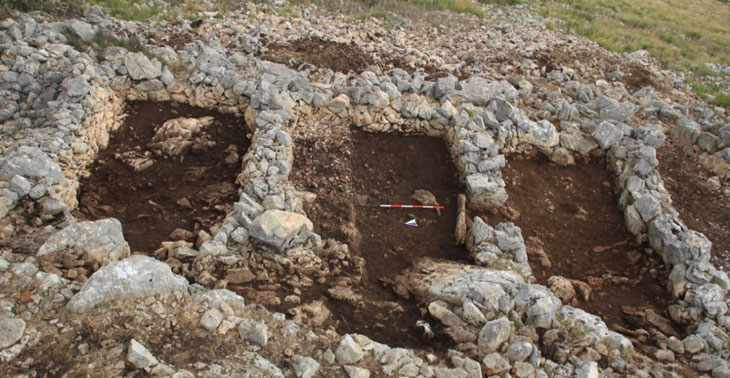 For the excavation, the team opened an extensive area trying to organize the most difficult initial issue: the enormous amount of stones and the difficulty to walk. The first part to be excavated was the gate and the main medieval street, so that the rest of the operations (including the next campaigns and the visits) could be made.

The area was finally divided into two large sondages in order to document the deposit. We have excavated part of two streets and five internal structures. Most of them have been identified as probable storehouses, but the closest structure to the gate could have been a house for the guardian of the fortification.

The excavation has initially confirmed our hypothesis, but we won’t be able to ascertain it until we finish the analysis, including the pottery study. We have recovered an important amount of features, including a lot of earth that have been completely floated for the archaeobotanical analysis. Also the soil samples have been treated and divided for the chemical and the biochemical analysis in the labs of Palermo, Rome and Sheffield.

At the present moment all the data obtained from the excavation is being studied. A 3D model of the structures found is also being developed. Its interpretation will be critical to finally state that the structure excavated is a fortified collective granary.

The activity has also been very successful in terms of social impact. Following the Community Archaeology principles, we strongly believe that community engagement contributes to strengthen local identities, as well as to promote heritage protection and conservation strategies. Thus, we have contacted local associations and community groups, such as Sicilia Antica, Archeoclub di Castellammare del Golfo, Save the Castle of Baida or Grupo Archeologico Xaipè. Participants in these groups, have collaborated during the campaign, and have provided educational space to introduce t the aims of the project. Also the collaboration on behalf of the local authorities Sopraintendenza ai Beni Culturali ed Ambientali della Provincia di Trapani, has been critical for the success of community involvement. 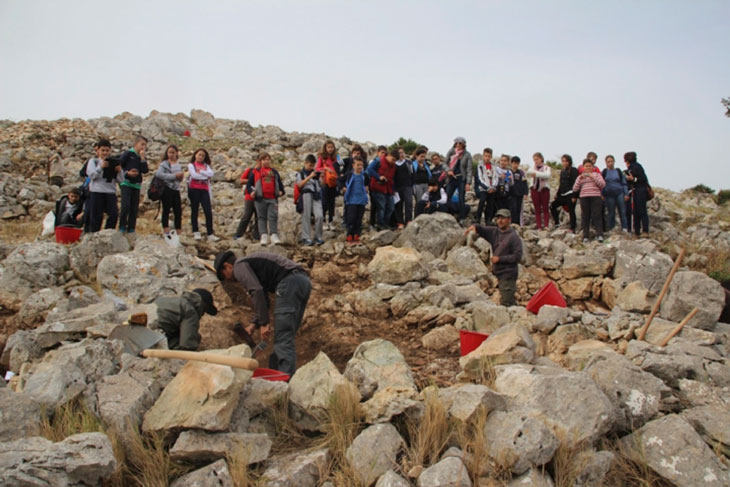 We have received visits from three secondary schools from the province of Trapani: Artist and Classic School of Trapani, Scientist School of Sciacca and the Castellammare del Golfo School. More than 220 students joined our guided visits at the excavation sites.

For educative and dissemination purposes we have made a documentary that explains the objectives and main activities developed. The documentary is in Italian, although we plan to translate it into English: http://www.memolaproject.eu/node/520.

In all those activities the Max van Berchem Foundation has always been mentioned as one of the main sponsors. Thanks to the excellent results and the new collaborations the team have decided to organize a new archaeological campaign at Pizzo Monaco. We are also planning some more outreach activities related to the excavation, but also for the anthropological, environmental and agronomical parts of the project.