The historical site of al-Hîra is located to the east of al-Najaf and to the south of al-Kûfa in south-central Iraq. It covers some 25 square kilometres on the easternmost end of a rocky bluff stretching in northwest-southeast direction. The foundation of al-Hîra probably goes back to the 3rd century, when a change in the course of the Euphrates resulted in a shift of the major branch of the river to the west. In the 5th and 6th centuries al-Hîra became the capital of the Arab Lakhmid rulers. Under their domination the city developed its proverbial splendour that was still praised by the Arab poets in the 9th and 10th centuries. In the year 633 al-Hîra was taken by the troops of the Muslim general Hâlid ibn al-Walîd. Only six years later, in 639, the garrison town of al-Kûfa was founded nearby. Whereas al-Kûfa subsequently developed into one of the centres of early Islamic Iraq, the sources indicate that al-Hîra continued to exist until the 10th century at least. After its final abandonment the relics of the city went into decay but they have never been transformed by construction activities until recently. Today a considerable part of the area of ancient al-Hîra has been built over and the rapid growth of al-Najaf threatens the undisturbed areas that remained.

Whereas the history of al-Hîra has been the subject of several studies[1], archaeological research on the ground has been restricted to excavations of isolated structures, which were published in preliminary reports or remained unpublished. In contrast to this the present project pursues an integrated approach focussing on questions of settlement development and urban context and seeking to provide data for the definition of areas of high heritage value that should be protected and further investigated archaeologically in the near future. Relevant data are acquired by the evaluation of satellite images, aerial photographs and map data, by the topographical identification of previous excavations and a comparative review of their results and by a survey of still undeveloped areas and adjacent zones extending to the south and southeast of present day Najaf and Kufa. The project is carried out in cooperation with the Department of Antiquities, Najaf, the German Archaeological Institute (DAI), and the Berlin Institute of Technology (TU) and supported by the University of Kufa.[2]

Considering that archaeological work at al-Hîra started in 1931, it is not surprising that the conclusiveness and informative value of the available data varies greatly. This refers in particular to the earliest explorations and soundings. Their exact position remains vague or even unknown. Another difficulty is that pottery and small finds were documented very briefly if at all. Against this backdrop one objective of our work was the definition of exact geodata and mapping of all sites of previous archaeological activities on georeferenced satellite images. Based on a close analysis of the respective reports and their synchronisation with satellite images, a preliminary map was produced. During the survey the data were checked on the ground and the map was corrected if necessary. In addition, archaeological sites identified in the Archaeological Atlas of Iraq (Tulûl Kunaidira, Tell al-Khwarnaq) and sites that were known or subject to investigations by Iraqi colleagues in 2007, 2009, and 2011 were added.[3] The resulting map (fig. 1) shows the location of 10 archaeological sites or groups of mounds, with the exception of the excavation conducted by the Oxford University Team in 1931. While it was possible to identify an area that most probably contains the Oxford mounds, due to the disturbed nature of the surface, it was not possible to confirm this on the ground.

Linked to the mapping program was the reassessment and (re)interpretation of the available data about small finds according to the present state of knowledge. Based on the combination and comparative analysis of this body of evidence, a first working hypothesis was put forward. Accordingly, the earliest traces of usage and settlement activities are found in the more easternmost findplaces such as Maqbarat Abû Sukhair, Maqbarat Umm Khasham and Tell Satih (MAS, MUKh and TS on fig. 1). With respect to Maqbarat Abû Sukhair, a chronological outline from the 1st to the 5th century AD has been proposed, whereas the majority of graves belong to the 4th and 5th centuries.[4] The sites further to the west (Airport excavations 2007-2011, AE on fig. 1) revealed finds indicating a dating between the 6th and 8th century.[5] Finally, the re-examination of the material from the brief French expedition (FE on fig. 1) published by M.-O. Rousset together with the finds from the Oxford excavations kept in the Ashmolean Museum revealed that the pottery from the survey dates to the 7th and 8th centuries exclusively.[6] In contrast to this the Oxford excavations produced pottery-types datable to the 8th century as well as types that are characteristic for the 9th and 10th centuries. This preliminary synopsis seems to indicate a shift of settlement activities from east to west resulting in the spatial juxtaposition of different use phases.

One of the objectives of the survey is the testing and verification of this working hypothesis by enlarging the investigated area and the systematic collection of diagnostic finds. For the survey, five areas were defined in advance: the area on the edge of the Bahr Najaf, between Maqbarat Abû Sukhair and Kharâ'ib Sadir (MAS, TKh, KhS in fig. 1), the zone around the archaeological sites in the area of al-Najaf International Airport (AE), the area around the Tulûl Kunaidira (TK) and the area of the former French expedition (FE). Due to the limited time, not all of the predefined areas were surveyed completely during this campaign. 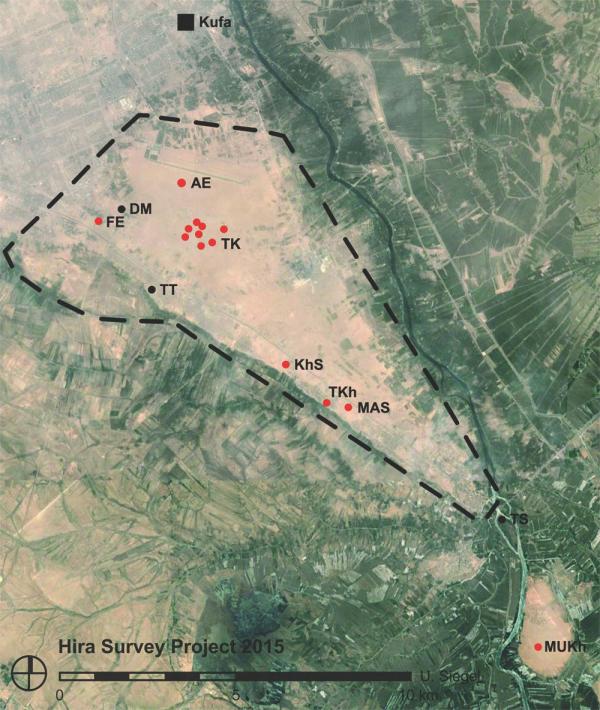 The survey was carried out from the 6th to the 14th October 2015. Due to the different nature of the areas and sites investigated, surveying was conducted following two different methods. Sites of restricted extension such as those on the edge of Bahr Najaf were surveyed intensively. This is to say that the team members walked in a distance of 5-10 meters. For areas of broad expanse such as those to the south and within al-Najaf Airport a different strategy was developed. The team members walked regular tracks roughly in north-south direction, taking into account ground conditions. The width of each surveyed field was approximately 200 m, the length of the tracks varied between 300-500 m. The surveying comprised the collection, documentation and evaluation of diagnostic pottery, stucco, glass and slag, the systematic description and mapping of architectural remains (mounds, tells) and of topographical features with GPS, including disturbed areas. The resulting data are combined, evaluated and presented in the form of site sheets and area sheets.

The condition of the various surveyed areas varies considerably. Consequently the informative value of the data obtained is fairly different. The entire edge of the Bahr Najaf is severely disturbed by settlement and constructions activities as well as by erosion. The surface shows little traces of historical structures, the amount of surface finds is comparatively low. The area of the former French expedition is likewise partly settled and cultivated, though there is much surface pottery, among them moulds, wasters and slag indicating productions sites. Interestingly, only this area revealed moulds and moulded pottery. The most interesting results were obtained from the extensive surveying within the precincts of al-Najaf International Airport and to its south (fig. 2). Even if these areas are partly disturbed by former agricultural cultivation and some mounds were partially levelled in order to install military positions, it was possible to trace surface features indicating architectural structures and to collect meaningful numbers of diagnostic finds, among them two stucco plaques with incised and coloured decoration representing a cross (fig. 3). The evaluation process is still underway, but it is already quite obvious that the settlement layout consists of groups of building clusters and that areas of open space separated these clusters. In this respect our results confirm the descriptions given by the text sources. The survey also demonstrated, however, that remains of building and settlement activities cover wide areas around and beyond the clearly visible high mounds. The still ongoing mapping of the sites on georeferenced satellite images demonstrates this clearly. The finds collected from the area indicate a dating between the 6th and 8th centuries. 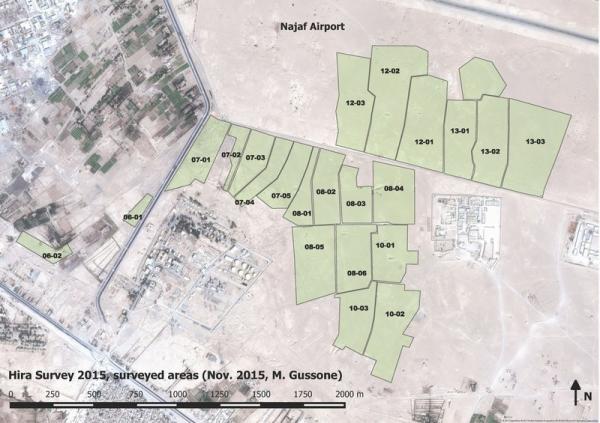 Fig. 2 Surveyed areas located within the precincts of al-Najaf International Airport and to its south (Bing maps satellite image, modified by M. Gussone). 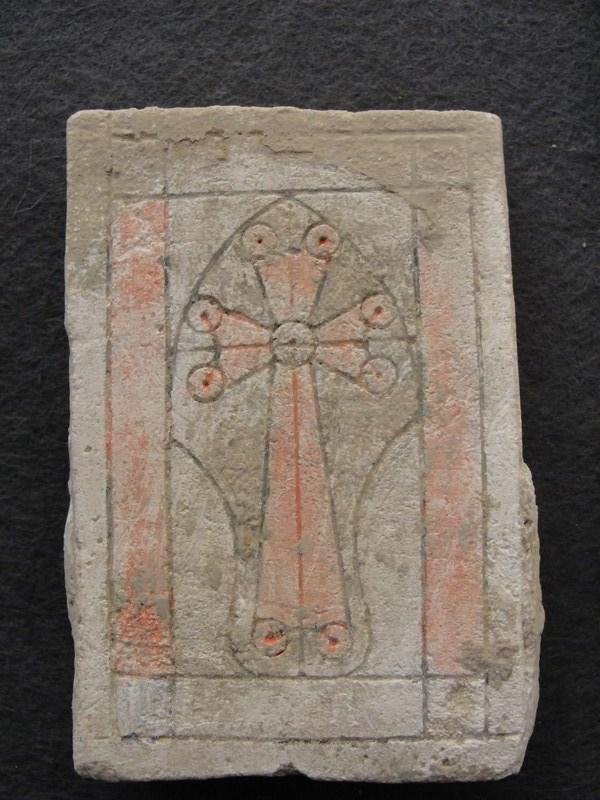 We express our thanks to the Max van Berchem Foundation for its generous support. The very interesting results encourage us to envisage the continuation of the survey and its expansion by way of geophysical investigations in the near future.

[2] We express our heartfelt thanks to the head of the Najaf Directorate, Muhammad Hadi Bidan al-Mayali and his collaborators during the survey, Walid Matar and Wissam Abd al-Hussein, to Margarete van Ess (second director of the Oriental Department of the German Archaeological Institute), Alaa al-Lami (University of Bagdad) and Nabeel al-Mezel (University of Kufa) for their great support and the mutual scientific exchange.

[3] We thank the Department of Antiquities, Najaf, for providing access to the field reports and the field directors, Shakir al-Jabari and Diya Abd al-Hasan for their valuable indications.

[5] The unpublished reports do not provide any dating except for a general ascription to the period of al-Hîra. The proposed dating is based on personal inspection of parts of the pottery finds by M. Müller-Wiener in February 2014.