The archaeological area of Estakhr, 5 km north of Persepolis, consists of a large town enclosed by walls with rounded towers, whose remains are still discernible. It includes the remains of a large mosque, with a column and bull-capital dating back to the Achaemenid period. It was partly excavated in the 1930s by E.F. Schmidt and E. Herzfeld, but their researches were never fully published (E. Herzfeld, Archaeological History of Iran, London 1935; Id., Iran in the Ancient Near East, London - New York 1941; E.F. Schmidt, The Treasury of Persepolis and Other Discoveries in the Homeland of the Achaemenians, Chicago 1939; Id., Flights over Ancient Cities of Iran, Chicago 1940).

The works of the Estakhr Archaeological Project (two seasons in 2012), have been addressed at a better understanding of the complexity of the archaeological area of the town and its surroundings, as well as at an in-depth investigation of a sector within the city walls. The works included archaeological and topographic surveys, and the realization of an archaeological map of the site, furthermore, in the chosen urban sector, digital terrain modeling, geo-physical investigation, the excavation of a test trench, and the preliminary study of the finds.

The pottery and the evidences of structures documented during a first survey revealed that the town was not totally abandoned in the 11th century, as formerly believed on the basis of the historical sources, but that restricted areas on the outskirts of the walled town were actively inhabited into the 13th-15th century. Their location, far from the earlier core of the town and the mosque as well as from the main gate of the town, may be related to the defensive requirements of a smaller community. More recent frequentation of the site is attested by tombs made of deposits of stones and by alignments of stones, probably related to temporary dwellers. The modern fort, called takht-e tavus (fig. 01), obviously points to a recent military occupation: an aerial photograph of 1932-1934 shows standing barracks within it. 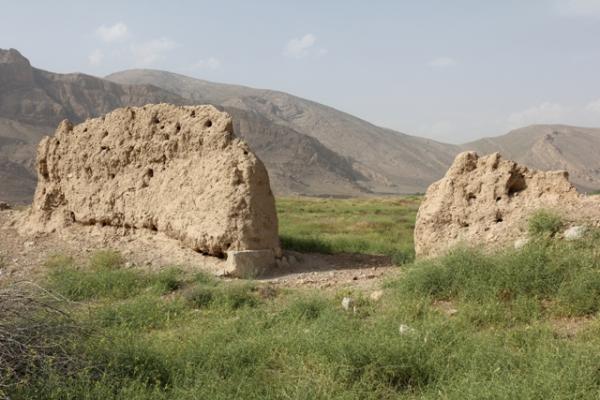 The sector chosen for the in-depth investigation is the area to the west of the mosque. Main aim was to explore the urban development of the town in a promising sector during the early Islamic period, when the city flourished as a provincial capital first, and as a commercial town later. Here, an unearthed building was identified on one of Schmidt’s aerial photographs by D. Whitcomb (The City of Istakhr and the Marvdasht Plain, in D. Reimer (ed.), Akten des VII. Internationalen Kongress für Iranische Kunst und Archäologie, München 7.-10. September 1976, Berlin 1979, pp. 363-370), who suggested that this structure could be the 7th century dar al-imara, when Estakhr was capital of the Fars province. The combination of mosque and dar al-imara is known from other Islamic cities, but no examples have been yet investigated in Iran.

We started our investigation in this sector realizing a 3D digital terrain model (DTM), whose results initially seemed to contradict the aerial photograph: a deep depression corresponds to the line of the wall of the suggested building, while patches of elevated ground appear to the west of that line (fig. 02). Along the same line, following almost precisely both the route of the lines visible in the aerial photograph and the depression of the ground shown in the DTM, the geo-physical survey (by S. Gondet, K. Mohammadkhani) detected a strong anomaly, that extends to form a square having the same orientation of the mosque (fig. 03). 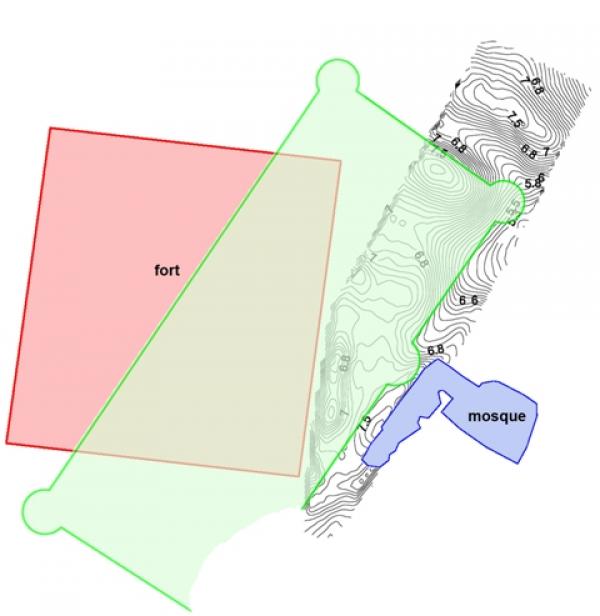 Fig. 02. Preliminary digital terrain model of the area west of the mosque.
The palest ground outlines the uncovered rectangular building suggested by Whitcomb 1979 (elaboration A. Blanco) 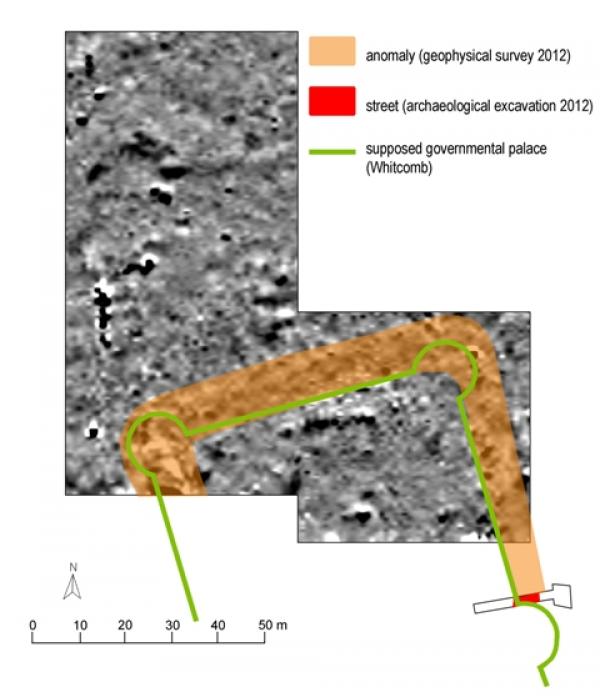 Fig. 03. The anomaly in the geophysical survey
(outlined in green is the palace as hypothesized by D. Whitcomb 1979; rendering L. Ebanista)

The excavation, undertaken with a test trench in this sector (figs 03-04), had an unexpected outcome and explained these deceiving incongruities: a large paved street with an underneath sewer came to light, in correspondence of the depression shown in the DTM, of the geo-physical anomaly, and of the line visible in the aerial photograph.

On its east side, the test trench was set out from the qiblî wall of the mosque where a small door was detected during the topographic survey. This secondary access to the mosque suggests a possibly significant connection with the area behind it encompassed by our investigations; it could be the passage between the mosque and the supposed building. 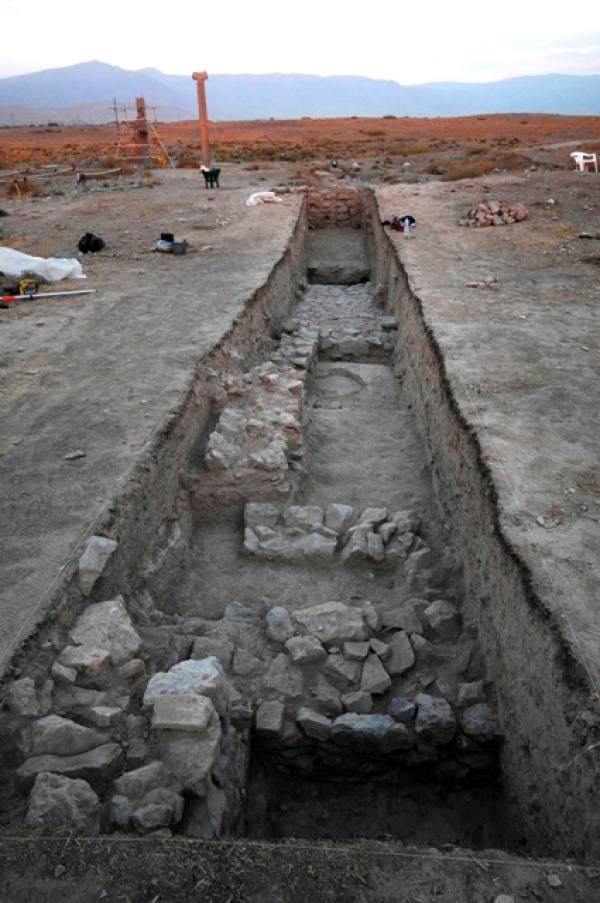 In the trench, at least eight phases were identified (fig. 05).

Phase 1 relates to the exterior part of the mosque wall (fig. 06), made of local limestone chips of various sizes joined with a small amount of mortar, and almost 2 m thick; a semi-circular tower containing a filling of loose material projects on the exterior. When this wall was built, the small door was also planned.

The main retrieval of the excavation is the large paved street (more than 6 m wide, fig. 07) that covered a significant sewer running along it and sloping to the south (fig. 08). As its chronological relation to the mosque could not be established, it was thus assigned to Phase 2. Of the pottery found in the filling of the sewer one fragment of splash-ware can be broadly attributed to the 9th-11th century. The paving of the street is altered in its western sector, where it was mostly rebuilt using flakes of stones from the original paving in the subsequent Phase 3. 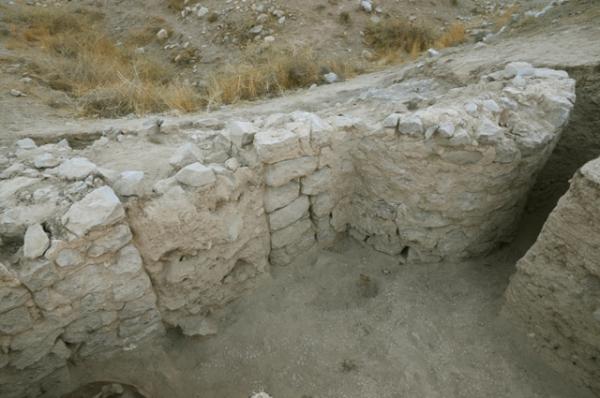 Fig. 06. Phase 1: The wall of the mosque showing the door and the semi-circular tower
(photo A.M. Jaia) 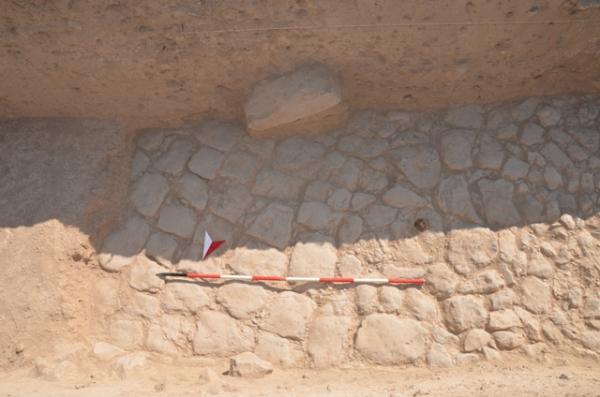 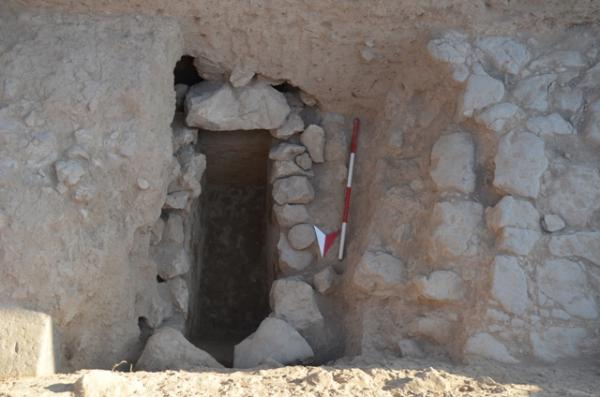 In Phase 3 the whole area that overlooks the west side of the street underwent a complete makeover. Beside the alteration detected in the paving of the street, this included the construction of a room slightly differently oriented than the mosque: we excavated its northeast corner located along the street. The walls are built ex novo from the foundations; their association with the makeover of the street are substantiated by the fact that they re-employ some elements from the original paving of the street, of which one complete.

In the western part of the trench, two floors were brought to light that are at the same level of the paved street (Phase 2a): the one closer to the street includes a tannur and does not relate to any wall (fig. 09); the second floor relates to a construction whose orientation follows that of the mosque, of which the northeast corner was excavated in the west end of the trench. Its preparation layer (fig. 10) included one fragment of imported Iraqi gold luster ware (late 9th - 10th century); its employ must have ended not earlier than the 10th century for the ceramics found in the covering layers (“Samarra horizon” ware with turquoise-green splashes, and a fragment probably related to graffita). 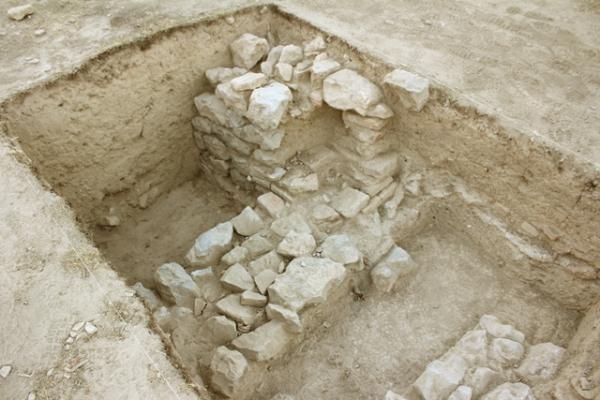 Circumstantial evidences (their level; the orientation of the construction) suggest that both floors may have been in use at the same time of the street in Phase 2. They are certainly earlier than the construction in Phase 3 as this cuts the tannur (fig. 09). This happened not earlier than the 11th century, as suggested by the finds of the layers covering both tannur and floor (including graffita, unglazed molded wares, unglazed wares with emerging inclusions and vegetal chaff on their surfaces). The fabric and the shape of the latter suggest that they are related to the painted pottery (also called pseudo-prehistoric and Madabad wares) which is attributed to a range of dates from the 11th century or slightly earlier to the 14th in the scholarly literature.

The likely decline of the area between the street and the mosque is evidenced by the closing down of a tannur located at the door of the mosque, whose hob is set at the same level of the street and of the mosque door (Phase 4, fig. 11); subsequently, the wall of the mosque collapsed and a narrower path on the west replaced the street (Phase 5). From the collapse of the mosque wall came a carved grey stone fragment, which might have been originally part of a bell-shaped capital of the Achaemenid period (fig. 12) that was re-employed for the building of the mosque. 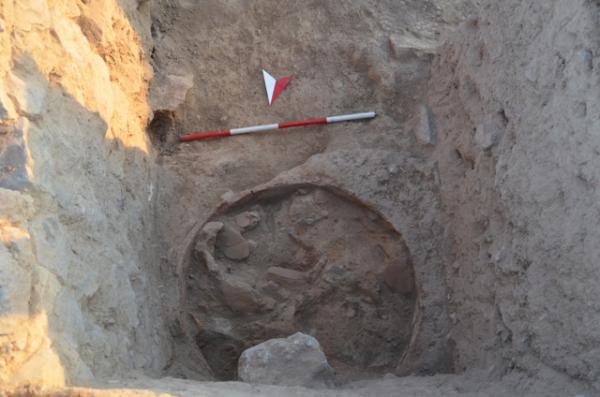 Fig. 11. Phase 4: The tannur located at a door of the mosque
(photo L. Ebanista) 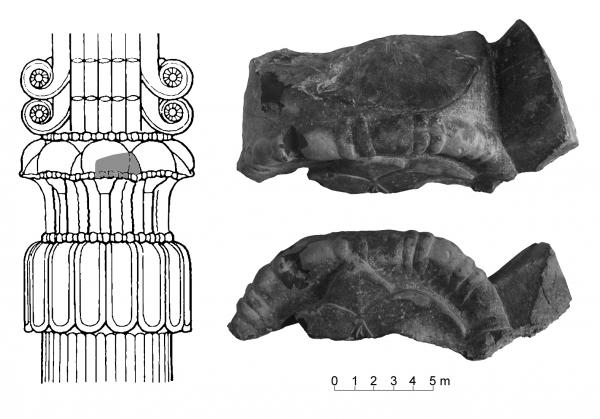 Fig. 12. Phase 5: Fragment of an Achaemenid capital re-employed in the mosque wall
(photo and rendering A. M. Jaia)

Phase 6 is represented by a wall of reused bricks and irregular limestone blocks, resting on a layer of earth and covering the walls of Phase 3 below. Phase 7 consists of a pottery dump located approximately in the middle of the trench, that contained several nearly complete unglazed vessels that can be assigned between the 10th and the 14th centuries (fig. 13). Phase 8 shows recent agricultural activity (traces of plough and of animal farming).

In conclusion, the excavations revealed that the anomaly of the geo-physical survey is in correspondence of the paved street and the sewer, which also correspond to the depression shown in the DTM; the construction of Phase 2a in the west part of the trench conforms to the raised forms shown in the DTM.

The orientation and development (geo-physical evidence) of the paved street and the sewer seem to define an important quarter that was situated to the west of the mosque, whose development can be partly followed on the geo-physical survey. The construction of Phase 2a belonged to a building that certainly was part of this quarter, and that may be coeval to the street; further investigation will clarify its nature, but the discovery of a door in the mosque wall might well indicate a privileged passage between the two buildings, and give some clue on its significance. It is possible that the area between the street and the building was initially free or that a fence separated them; cooking activities are attested here by the tannur of Phase 2a. In Phase 3 the area was occupied by a new construction, in conjunction with the partial reconstruction of the west side of the street.

The later developments, as the narrow paths that replaced the street, point to a decline in the relevance of the quarter to the west of the mosque, most probably connected with the decay of Estakhr in the 11th century.