The most recent excavations at Aqaba in 1993 concentrated on the Large Enclosure which was hypothesized to have been the Congregational mosque of Ayla, originally built by 'Uthman ibn 'Affan about 650. This structure encroaches over the Syrian Street, one of the axial streets of the original city. This alteration of urban street design suggests construction of the present remains in the early Abbasid period (phase B, 750-850 A.D.). This structure was part of the reconstruction of the city after the 748 earthquake. This inference from the plan is now confirmed with stratigraphic evidence.
Multiple layers of clean gravel floors were just below the present ground surface and the plan of walls and columns was determined only from their foundations. The column foundations were 3.5 m deep on the western side and surrounded with fill bearing Umayyad artifacts (phase A, 650-750 A.D.). Toward the East, near the wadi, the foundations were more limited (1.5-2 m deep) and running foundations suggest an earlier phase of building. The plan shows a broad courtyard with a peristyle colonnade around three sides (the eastern side must be imagined). The southwestern side has a second row of columns marking this as the covered part of the mosque. In the center of this southwestern wall was a deep niche, the mihrab. Numerous tesserae indicated that the inner face of this wall was once covered with glass mosaics. 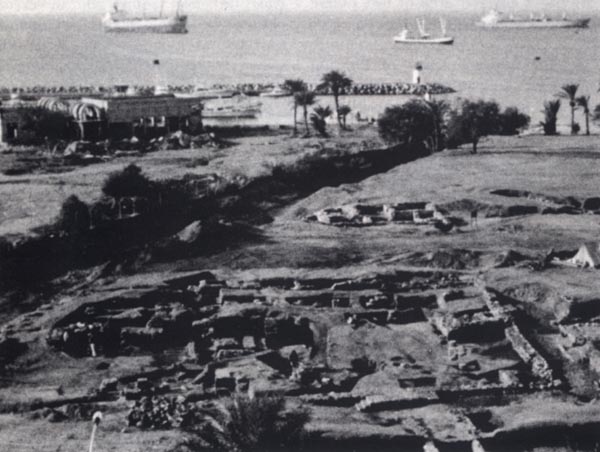 D. Whitcomb. Ayla-Aqaba : 1993 excavations with the Congregational Mosque in the left foreground

The architectural features of the Large Enclosure are consistent with early mosques:
1. The size is within the most common range for urban mosques.
2. The building was a raised platform with at least 3 entrances, approached by stairways.
3. In the north corner was a square structure which might have served as a tower (or sauma'a, an early minaret).
4. The peristyle of columns has an additional row on the southwest side forming a covered area of two riwaqs, i.e., the sanctuary.
5. The multiple layers of flooring composed of clean gravel without any artifacts (except for a deposit of 6 Fatimid dinars in upper layers).
6. Finally, the single niche in the south wall, its form very similar to early Islamic mihrabs.
Yet one might hesitate to label this the Congregational mosque (masjid Jami') of early Islamic Ayla. The problem in this identification is the southwest orientation of the qibla wall; common qibla in southern Syria and Jordan is due south, and the actual direction of Mecca is slightly east of south. For various reasons, early mosques are often oriented incorrectly; for instance the mosque of Wasit was misplaced by some 34°. Another example of an excavated mosque is that of Qal'at 'Ana on the Euphrates, where the ninth century mosque had a qibla direction some 35° in error. Northedge suggests this orientation was due to a lack of space on the island. One might argue that, due to the configuration of the head of the gulf of Aqaba, southwest is the direction of the Arabian coast. More interesting is the possibility that the original mosque was given the same orientation as early mosques in northwest Arabia (the Hijaz). Nevertheless, in spite of numerous comparisons and speculative reasons, this qibla represents a variation to a strong Muslim tradition. 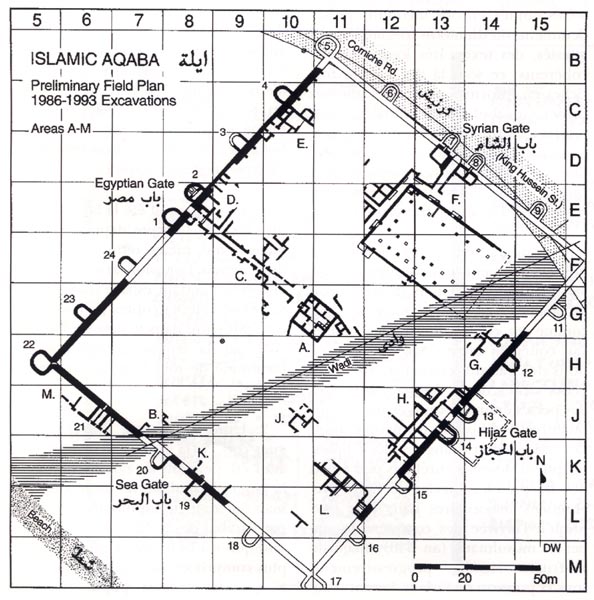 D. Whitcomb. Ayla-Aqaba : plan of excavations at the Islamic site of Ayla

This mosque of Ayla, like others in early Islamic times, was more than a place for religious services. The mosque was the scene of public meetings and political ceremonies, it was the place where the qadi held court, and it was the center of education in the religious and legal sciences. This last aspect was particularly important in Ayla. From the eighth through the ninth centuries, Ayla was a major center for hadith studies. A local Ayli school developed around al-Zuhri, particularly his students 'Uqayl ibn Khalid and Yunis ibn Yazid, the heads of two prominent scholarly families. Interestingly, these scholars also did periodic duty as police (or city-guards) in Madina. Needless to say, these men also emigrated to the great cities of Jerusalem, Damascus, Fustat (Cairo), and the port of Alexandria. The mosque of Ayla was rather like the Stoa of Athens, a place of study and discussion among the columns. And like Athens, further archaeological research can only amplify our understanding of this social and intellectual milieu.