The Friday Mosque of Golpayegan: Soundings and Architectural Survey | 2008

In the Western Iranian highland town of Golpayegan, the lofty brick dome towering above the roofs announces the Friday Mosque to the visitor approaching through the surrounding river oasis, which lies embedded in the mountain ranges of the Zagros. Upon entering the mosque, the building presents itself as a rather unassuming courtyard complex - except for the dome chamber. This room stands out against the rest of the mosque because of its architectural decoration, with brick patterns and stucco ornament. On this building, two characteristic elements of Islamic art can be observed at a very early stage: Muqarnas in regular rows of cells adorning corner squinches, and inscriptions in square Kufic. 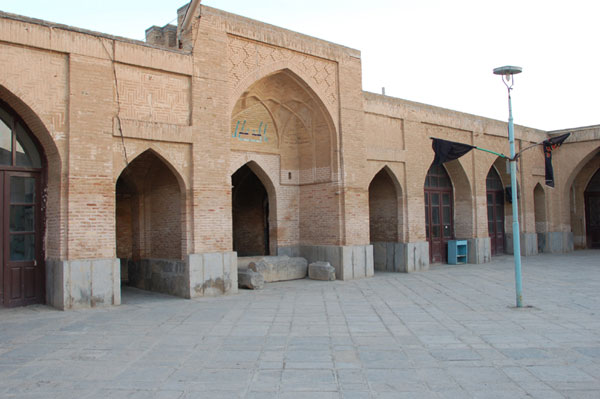 The Friday Mosque of Golpayegan is a building of high architectural standards, which experienced many turns in its history through the past nine centuries. This alone would justify a thorough examination. Besides, the exploration of the mosque can contribute to clarify overarching questions concerning the history of mosque architecture in Iran. 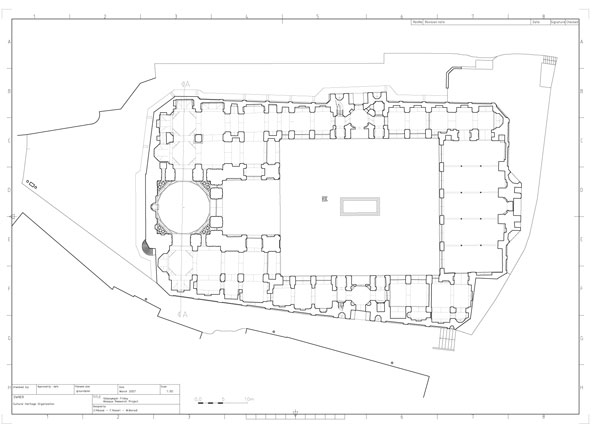 The research project on the Friday Mosque of Golpayegan, a cooperation between the Iranian Cultural Heritage and Tourism Organisation (ICHTO) and the University of Bamberg, started with a campaign in late winter 2007. From the side of ICHTO, the two research departments of Archaeology and of Architecture & Urbanism were involved, while a small group of archaeologists and architects formed the German part of the team. The Fondation Max van Berchem funded the travel costs and other expenses of the German team. 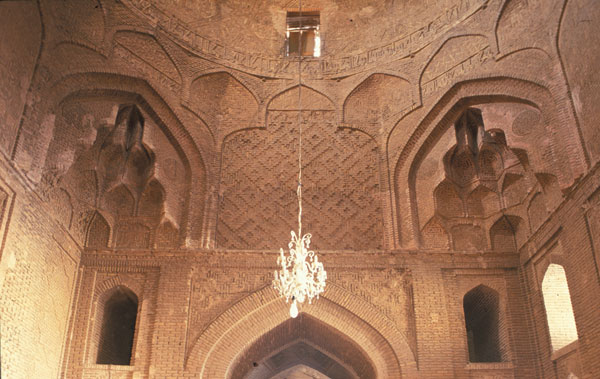 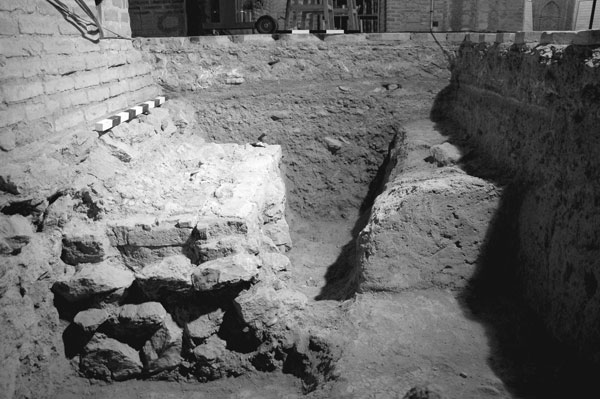 Concerning its position within the structure of the Friday Mosque, the dome chamber of Golpayegan appears clearly separated from the adjacent parts. The vaulted halls surrounding the courtyard, together with the two extant entrance bays, can be dated to the early Qajar period. Likewise, two walls perpendicular to the front of the dome chamber just like lateral walls of an iwan, belong to this building phase, while the hall on the opposite side of the courtyard has been replaced by a modern concrete construction. There is a clear joint between the Saljuq and the Qajar parts of the building. 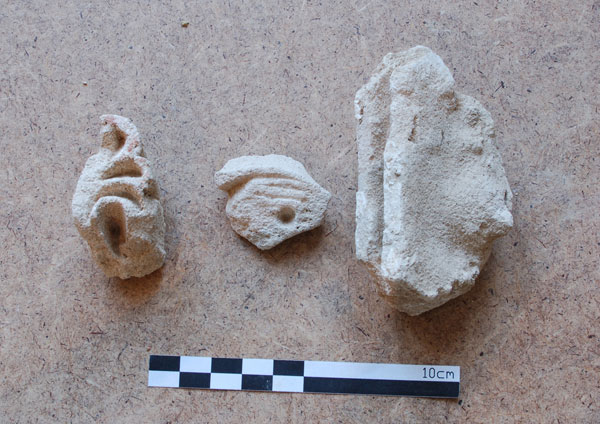 The architectural survey of the mosque aims at an exact documentation of the existing substance, an analysis of the principles of construction, and a reconstruction of the history of the building in more detail. The building was measured partly by hand (the dome chamber in particular), partly with a laser disto. Exact ground plans of the whole mosque and of the dome chamber were drawn, and features of the elevation were documented in writing. A survey of the surrounding urban structures was also begun (apparent foreigners walking around with drawing pads aroused some suspicion, which was, however, cleared with the help of Iranian team members). 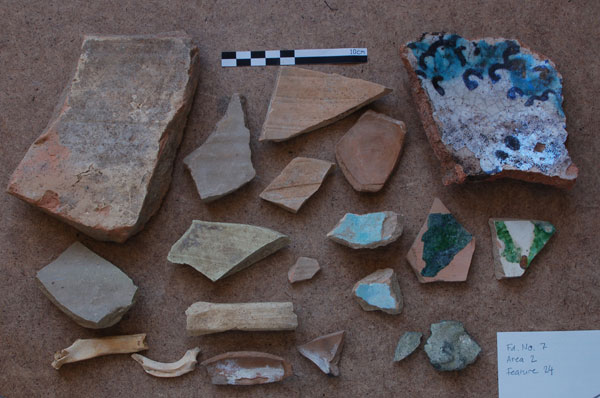 Fig. 6 : Golpayegan, sample of ceramics and bones from the soundings

It can be said that the architect of the dome hall worked with admirable precision. The slight inclination of two pillars, which apparently occurred due to inequalities in their foundations, was corrected in the course of construction, so that the upper parts of the building rest on a perfect square. Some features in the plan run counter to symmetry, without disturbing the overall harmony of the architecture. Obviously, the architect had to respect an existing construction next to the south corner of the dome chamber. This way, the rounded "buttress" at this corner turned out to be the last remnant of a minaret, which belonged to an earlier phase of the mosque.
During later periods, the mosque was not always adequately used. This is indicated by heavy traces of soot on different parts of the dome chamber, pointing to a hearth which was built into the mosque. From the Qajar period onwards, several rebuildings and restorations have brought about their changes in the appearance of the mosque.
Archaeological research started with soundings inside and outside the mosque. One trench was brought down in the dome chamber, while a sequence of soundings was used to examine an area of the Qajar part of the haram (or shabestan), just outside the Saljuq dome chamber. A small test trench was opened on the exterior, against the qibla wall. The latter confirmed the hypothesis of the minaret on the South corner of the dome chamber, since the brick masonry of the dome chamber clearly bonds against the outer face of the rounded structure. Under the modern floor of the haram, surprising amounts of ceramics (also animal bones) were found. They belonged to earth fill, used to level the mosque floor during different phases of restoration and rebuilding. In one place, a waste pit had been dug into the floor, which supports the view that the mosque was used for different purposes at some time, probably during the late Safavid period. Two silver coins from the Timurid period belonged to layers of later fill, and are therefore not conclusive for exact dating. 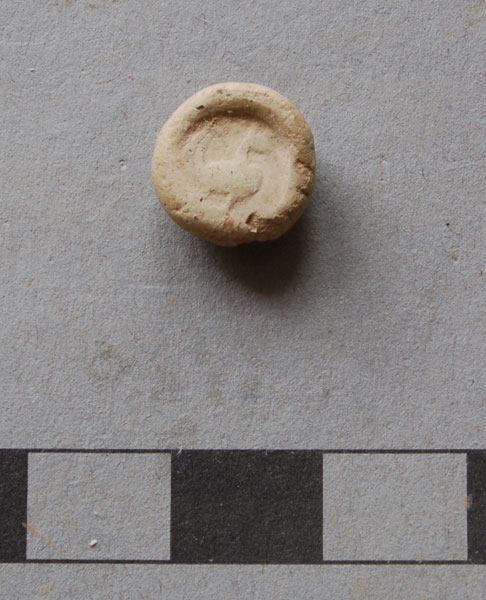 More important for the older phases of the mosque were elements of stucco decoration, which can partly be ascribed to the Saljuq building phase of the dome chamber. Typical for the period, they contain grid patterns, tendrils and leaves. Stucco plugs from the joints between the bricks were also characteristic. Some elements, however, seem to date from a pre-Saljuq construction. Among them, a small feathered half palmette is similar to elements of the Buyid phase at Ardestan. Clear evidence of such a pre-Saljuq mosque was unearthed in the dome chamber: foundations of a pillar, which was obviously razed to pave the way for the construction of 508/1114-15. While the foundations have a square plan, the pillars themselves seem to have been cylindrical. This is indicated by a considerable number of wedge-shaped bricks which are built into the lower layers of the Saljuq dome chamber, or were used to pave the floor, obviously in secondary use. It can be concluded that the pre-Saljuq Friday Mosque of Golpayegan followed the type of the hypostyle hall. According to the style of stucco fragments, this building can probably be dated to the 4th/10th century. Traces of an even earlier building phase can be seen in the remnants of mud brick and adobe which were visible in the lower layers of the soundings. Thus, the general picture at Golpayegan presents itself quite similar to that at Isfahan. There, the Friday Mosque of the Buyid period, with its hypostyle hall with richly decorated pillars, was partly razed to the ground to clear the space for the dome chamber in front of the mihrab, in 479-80/1086-87. 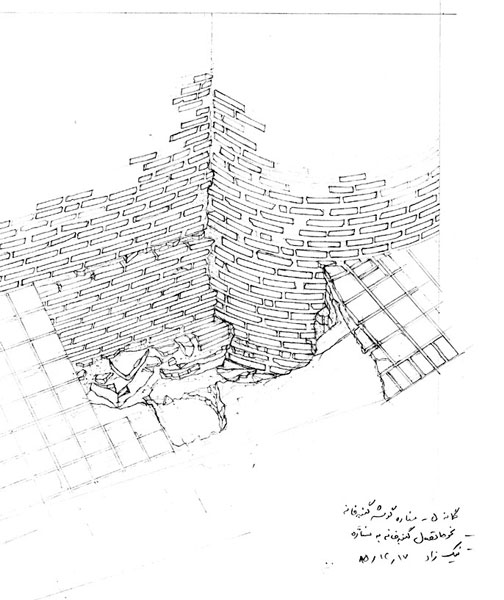 The situation in the lateral parts of the haram and on the courtyard side of the mosque is less clear. No pillar foundations were unearthed by the soundings in these parts, but this may be due to their size and position. On the other hand, there are clear indications of earlier mud brick and adobe constructions in these lateral areas. For the walls of the "iwan", it is still an open question whether they were built on foundations of the Saljuq period. It is also unclear whether they were in fact intended to bear an iwan vault of huge span (for which they would not have been strong enough), or whether a different form of roofing was planned. In Isfahan, as a contrast, it is clear that the iwan was an afterthought, since the exterior front of the dome chamber shows traces of its façade decoration. It is generally assumed that the qibla iwan, together with the other iwans, was built after a fire which destroyed part of the mosque, and which can be dated to 515/1121. If the foundations of the iwan in Golpayegan can be dated back to the Saljuq period, this would indicate that the combination of dome chamber and iwan was already firmly established at the beginning of the 6th/12th century.
These problems and some minor questions are awaiting a second campaign of research at Golpayegan. Together with a continuation of the architectural survey, additional excavations have been envisaged for 2008, thanks to the generous help of the Fondation van Berchem. It can be hoped that the fruitful cooperation between the teams will continue.