This session of fieldwork had two main components : geo-archaeological investigation to understand the natures of the sub surface deposits and checking features identified in the aerial map produced after the 2018 season. The idea of the geological investigation is to provide a vertical or stratigraphic element to the mapping to gain an idea of the depth and nature of deposits likely to be encountered during excavations. One of the most useful results of this season was that the area immediately around the mosque had extensive late remains of  buildings made of fired brick, often in secondary use. This indicates that reaching the earliest seventh and eighth century levels of the sites will be very difficult in this area and that the earliest deposits will be easier to reach and excavate at the southern edge of the archaeological site. Also the geological cores revealed the presence of a possible early water course which is no longer visible. Also core samples will be used to obtain 14C dates which should help to date the cultural layers.

Three sessions of fieldwork have now been carried out at the early Islamic site. During the first session we carried out a rapid survey of the whole site and the surrounding region to get an idea of how the site relates to the complex local topography in particular ancient canals, earlier pre-Islamic sites, standing monuments and shrines, as well as the natural environment which includes wetlands and stony dessert. The first season financed by the Max van Berchem Foundation comprised a surface survey as well as detailed photogrammetry. The third phase of the project took place during March and April 2019 and comprised surface survey, geological inspection, geo-archaeological sampling. In addition, results from the 2018 season were processed and used as a basis for detailed inspection of specific sites.  The priorities were:

1) To get geophysical data to have a more detailed idea of the depth and nature of the stratigraphy of the early Islamic site.

3) Examination of the trench or ditch next to the mosque to get an idea of how it relates to the occupation of the site.

4) Verify the results of the aerial survey by ground checking features identified in the aerial photographs.

The geophysical survey of the site was carried out by Martin Bates and Erin Kavanagh using a sand auger to obtain sample cores from beneath the current ground surface. Two main areas were selected for sampling, Area A to the south of the Khatwa ‘Ali Mosque and Area B on the north west edge of the site in the area of the sand quarry and the remains of the city wall. The rationale was to have core samples both from the middle of the site and also from the presumed edge of occupation. One of the problems encountered in Area A was the large amount of fired brick debris below the ground surface which meant that most of the boreholes were not able to reach below a metre. In Area B, a similar problem was encountered with large quantities of pale brown  silty brown sand with occasional quartz pebbles which was very difficult to penetrate with the sand auger and appeared homogenous to a depth of five metres.

Because of the large quantities of fired brick present beneath the surface immediately adjacent to the mosque, the main line of bore holes were laid out on a line 300 metres south of the Khatwa ‘Ali Mosque. The bore holes reached a maximum depth of nearly 6 metres (5.8 metres) and gave a detailed view of the stratigraphy in this currently unoccupied area. The surface elevation of the boreholes varied between 5 and 7 metres above sea level based on GPS survey and EGM2018 corrections. The main findings was that there is a series of manmade deposits alternating with periods of abandonment to a depth of 5.6 metres. Cultural deposits included layers of fired brick, unfired mud brick as well as layers of plaster. The water table was reached in five of the bore holes. In Borehole No. A4, cultural deposits including ceramics were found below the level of the water table possibly indicating a buried water channel later filled in with debris. 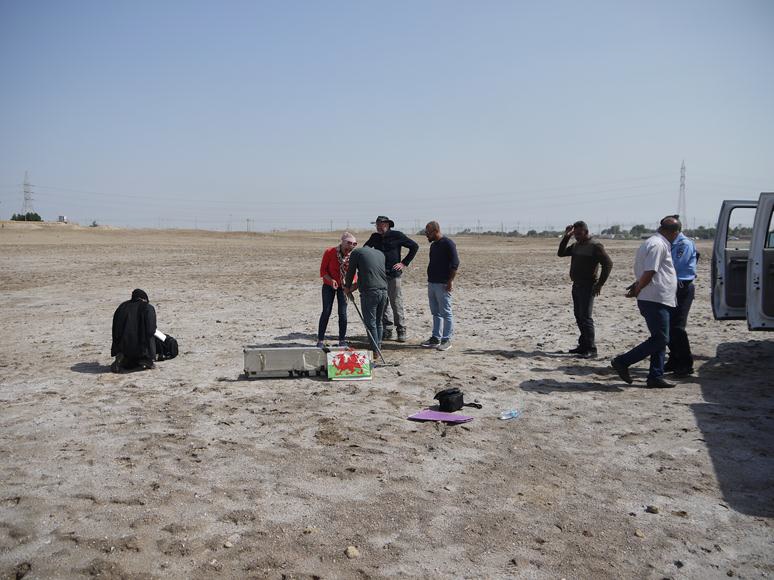 Sand auger in use to south of the mosque Khatwa ‘Ali

Area B is located next to the remains of the city wall identified from aerial photographs and also through ground survey. The particular interest of this area was to detect if the city extended up to and possibly beyond the walls or whether the walls enclosed unoccupied areas. A secondary consideration was whether there were remains of a ditch or moat next to the wall. Unfortunately the bore holes at this location revealed very little about the cultural history of this area. Despite achieving depths of more than five metres, no appreciable change in the composition of the strata were observed. Although the strata appeared to be primarily of natural origin and were similar to the quarry deposits identified as from the Dibdibba formation, occasional patches of mortar indicate that this might be redeposited.

Samples from the boreholes are currently being examined at the University of Wales for organic material which will be sent for 14C dating. The sediments are also being examined for molluscs and micro-fauna which might indicate degrees of salinity and other environmental information.

For this part of the survey the team was accompanied by Dr Nawrast al-Ayobi from the University of Basrah Geology Department who helped identify the different geological strata. Examination of a large depression used for the extraction of sand and other materials revealed deeply stratified deposits (approximate depth of twenty metres) which were mostly derived from fluvial action. A total of ten layers of Quaternary deposits were identified, in turn these can be divided into two main groups : an upper clayey cohesive layer and a series of lower layers made up of cohesion-less sediments based on sand from the Dibdibba formation. The upper layer varying between one and two metres comprised a series of clay layers made of fluvial and deltaic sediments.  Episodes of flash floods as well as ultra-arid periods with Aeolian deposits were identified. It was pointed out that whilst the upper clayey layers were unreliable for construction due to shrinkage and expansion the lower layers were more stable. 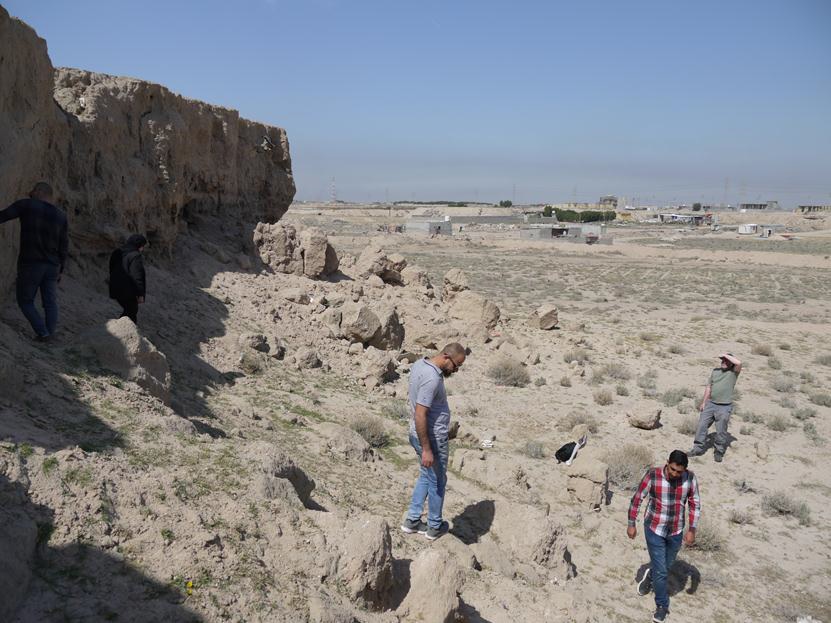 3. Ditch next to the mosque

One of the principle visible features of the archaeological site of old Basra is a ditch which runs from north-west to south-east skirting the perimeter wall of the Khatwa ‘Ali Mosque. Analysis of the topographic data from the aerial survey indicates a difference in height of the bottom of the ditch from 12 metres above mean sea level to less than 3 metres above mean sea level within a horizontal distance of 500 metres. This represents a drop of 9 metres in the bed of the channel from north-west to south east which certainly supports the idea of a water channel. Examination of the sides of the channel revealed large quantities of fired brick and ceramics in the area immediately adjacent to the mosque with diminishing quantities to the south-east. This echoes the results of the bore holes indicating massive structures built of fired brick in the immediate vicinity of the mosque with declining quantities to the south. Although the C14 samples have not yet been processed it appears that the massive concentration of fired bricks represents a later phase of construction probably post-dating the 9th or 10th centuries. Examination of the sides of the channel clearly indicates that it cuts through structures built of fired brick with successive layers of occupation. This indicates that the channel not only post-dates the mosque but also  that it probably post-dates most of the fired brick structures in the vicinity indicating a later medieval or later date for its excavation. Also visible within the banks of the water channel and also in most of the bore holes are gravel deposits probably indicating flash floods which occurred during the occupation of the city.

Digital terrain map of channel to south of mosque

In addition to the geo-archaeological survey the ground survey of sites identified from aerial photographs (both archive and UAV derived). Features identified from the photographs were checked on the ground to provide more information about which features are modern and which are historical. This survey was carried out using A3 prints from the aerial map and checking these against visible features. Amongst the modern features identified were trenches and emplacements from the 2003 conflict as well as some trenches which may date from WWI. The entire remains of the city wall were examined in more detail to reveal evidence of is construction. Important findings include the fact that the wall was probably over four metres high (maximum current height is 3.45 metres) and it was built in horizontal bands of pisé or rammed earth gradually diminishing in height as it rises (e.g. heights of 0.86, 0.54 and 0.45). It also appears that the wall was built in three layers an inner layer (0.70m thick) a core layer (0.80m thick) and an outer layer (up to 1.10m thick). Probably the most interesting observation is the remains of a least two semi-circular buttresses on the outside of the wall which may have formed part of a continuous corrugated outer surface for the walls. Unfortunately in most places the area outside of the wall has been much disturbed by recent construction and other activities so that it was difficult to investigate the presence or otherwise of an outer ditch.

City wall from west with remains of semi-circular buttresses