Champaner, founded just after 1484 by Mahmud Begarha (Muzafari dynasty), is an unique Islamic architectural and medieval urban precinct. It was a vibrant city that was the provincial capital until it was sacked in 1548 by the Mughal emperor Humayun.

While today the architecture is in partial ruins and many of its greatest monuments are quarantined by the protective fences erected by the Archaeological Survey of India, the fifteenth-century city plan is largely intact and offers a rare opportunity to study the original spatial context of medieval Islamic monuments. After the Mughal sack, the capital was moved to Ahmadabad, and Champaner was forgotten. But while the Islamic city's importance was eclipsed, the hill that protected it became an important pilgrimage destination for Hindus. Pavagadh hill is an odd volcanic eruption in an otherwise flat landscape, and perhaps because of this geographic anomaly, the hill came to be worshipped as a Hindu sacred landscape, inviting pilgrimage and attracting settlement and the building of forts and temples.

The study of Champaner is complex precisely because of its relationship to Pavagadh, and neither site can be studied in isolation as reflecting a single culture or occupying a discrete space. While Champaner's history begins in the late fifteenth century, the Hindu significance of Pavagadh is much older because the site was revered as the abode of the goddess Kali since the second century CE. Yet, on the hilltop, next to the goddess's temple, there is the startling presence of a Muslim tomb. In this sense, the site is emblematic of South Asia's rich cultural hybridity, which is both India's strength and the source of current sectarian tensions. 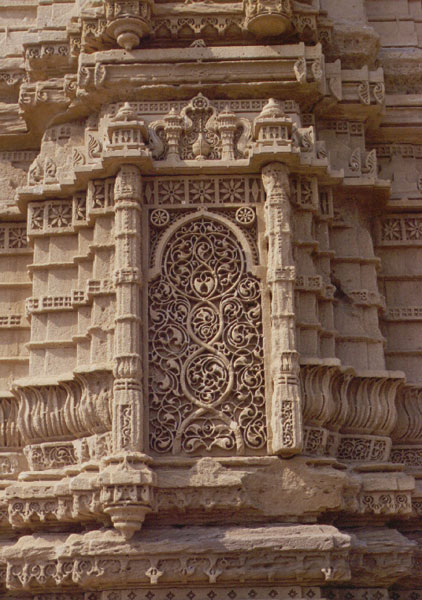 Detail of stonework from the Kevda Masjid in Champaner

Architectural historians Henry Cousens, J. Burgess, E. B. Havell, Percy Brown, and Herman Goetz singled out the architecture of Champaner as representing the finest of Islamic buildings in Gujarat from the sultanate period and the most indigenous in style, derived from regional traditions. In a period of a half century, a style of mosque and tomb architecture developed that was characterized by exquisite stone detail - such as carved screens and surface relief - and harmony of proportions. The mosques of the sultanate period in India have been insufficiently studied, eclipsed by the grandeur of their Mughal successors. This is particularly regrettable in Champaner, which has a dozen standing mosques, tombs, palaces, gatehouses, fortifications, and stepwells, built by the rulers and elite of the city. The buildings are particularly unusual in that they combine features of religious and residential architecture. Mosques such as the great Jami Mosque were built on high plinths and have the unusual feature of second story terraces. Their rooftops are pierced by air wells that admit light into the ground floor interior below, and they have ornamental balustrades and benches that invite the visitor to sit, enjoy the refreshing breeze, and look out to the stunning panorama of the surrounding skyline.

The site's commanding location and natural defenses attracted Muslim and Hindu rulers. Champaner functioned as the capital of Gujarat in Mahmud Begarha's reign and began as a siege camp at the Pavagadh foothills. The Sultan built the outer wall of Champaner Fort, stretching over nine kilometers with nine gates and circumscribing an area roughly semi-circular in plan, in typical medieval urban form. Outside its eastern gate was built the handsome Jami mosque, the largest building in the city. Nine streets radiated from the royal enclosure to the city gates, demarcating the edge of neighborhoods, and these were intersected by secondary roads. The main streets were lined with bazaars with toll stations at the city gates. Houses of the wealthy were built around courtyards while those of the common folk were smaller and shared open space with the community. Mosques and tombs were major landmarks in the city, their domes and minarets inscribing the skyline with Islamic presence. 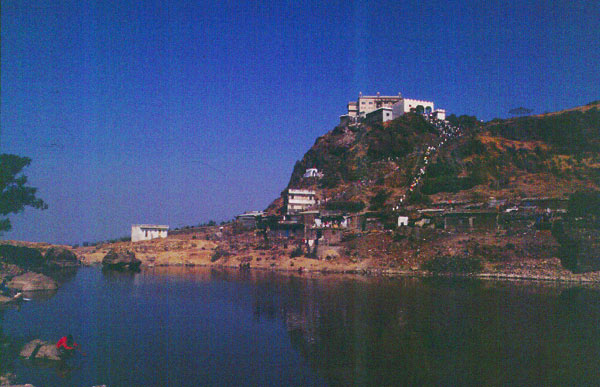 Kalika Temple on the top of Pavagadh hill at Champaner

Champaner was the last of the fortified settlements built on the sitethey extended back to eleventh century CE, built by Hindu kings who took full advantage of the topography to build successive lines of defense on the hilly plateaus. Palace remains can be discerned in the Atak, Bhadrakali, and Mauliya Plateaus. Mehmud Begarha strengthened the earlier fortifications, rebuilding the walls with passages for troop movement and catapults (still visible today) to hurl stone missiles from the Atak Fort (raised slightly above Champaner city) toward the approaching enemy. Elaborate gateways controlled access to the plateaus above. The site supported successive layers of urbanism, the most elaborate and fully developed being Champaner itself.

The natural landscape offered many advantages: the hill was quarried for stone building material, its forests yielded timber and grazing grounds, and the river and tributaries supplied the water that was the life blood of the settlement. Champaner harnessed the visual and ecological potential of the site to the fullest extent in its buildings and waterworks. An elaborate system of water management collected the monsoon rains. Earthen embankments created large macrocatchments that captured the run-off from the hills and supplied the daily needs of the populace. An architecture of linear and helical stepwells, tanks, and serpentine channels reflected a refined design sensibility. In the Royal Enclosure are the remnants of a remarkable water pavilion that drew upon the aesthetic and cooling properties of water. Mansions and their gardens were generously supplied with running water, and there were so many private and public sources of water that Champaner was known as a "city of thousand wells" by medieval historians.

Landscape archaeology will someday reveal the gardens that Champaner was famous for in its day. There is currently only one excavated siteAmir's Manzil, an elite residence that offers any clue to what formal gardens were like in that period (R. N. Mehta, Champaner: A Medieval Capital). This mansion, which had a running rivulet nearby, had elaborate water architecture consisting of stepped tanks, serpentine channels, pavilions and a garden court. The royal gardens with the Champaner Fort are now buried under agricultural fields with only the ruins of a summer pavilion extant. In the southeastern quarter of the city, in the ruins of a palace known as Rani no Mahal, are the remains of water tanks and walkways. A suburban pleasure garden for the sultan on the banks of the lake Bada Talao has only a mosque and a dovecote remaining. 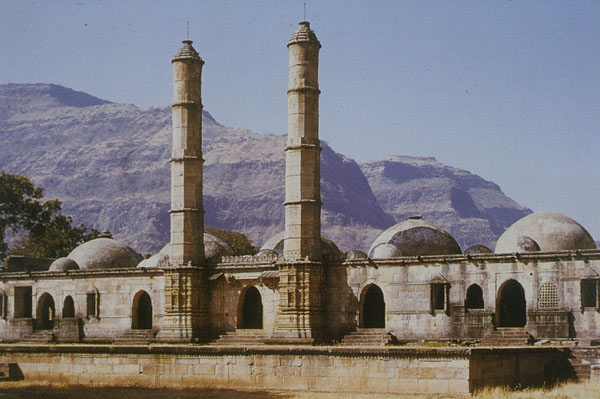 The site was designated a World Heritage Site in 2004. Since 2001, a team of landscape architects and historians from the University of Illinois, Urbana-Champaign, in collaboration with Karan Grover of the Baroda Heritage Trust, has been studying and preparing a master plan for the management and preservation of Champaner-Pavagadh. The site provides the opportunity to study the interrelationship of architectural, urban, and landscape features in a complex historical settlement. We are studying not only architectural typology and patronage but also the visual structure of the landscape the viewsheds and vistas afforded by the natural topography, and the visual focal points combined with axes of movement that produced urban design. We are also studying the site hydrology visible evidence of the interconnectedness of built architecture and managed ecology. Finally, we are using the experience of working at this historic site to think critically about the objectives and problems of heritage management at a site which has very different meanings for diverse communities of residents, merchants, pilgrims, archaeologists, historians, and government agencies.

Preliminary versions of the work have appeared as site reports and a description of the project and an extensive archive of images is provided on the department's web site (http://www.landarch.uiuc.edu/Champaner/index.htm). With the support of the Fondation Max van Berchem, we are currently preparing a book-length study that will reflect the perspectives of architects, landscape architects, architectural historians, planners, geographers and we sincerely hope the people who live, work, and worship in Champaner-Pavagadh.