High altitude towns of the Qarakhanid Empire. New Archaeology at the medieval center of Tashbulak | 2014

The Qarakhanid Empire was the first Turkic nomadic state in Central Asia to adopt Islam, converting ca. 950 CE, yet little is known of their social organization, economy, or day-to day life on account of scanty historical records and the limited archaeological study devoted to Qarakhanid sites. The spectacular works of scholars, poets, and architects within the Qarakhanid realm produced some of the era's most iconic examples of Islamic literature, science, and architecture, including notable Islamic Silk Road monuments such as the Kalyan minaret in Bukhara (Uzbekistan) and mausolea in Uzgen (Kyrgyzstan). Yet the 'nomadic' character of the Empire’s rulership and economic structures complicates our understanding of their bureaucratic and political organization, since their way of life was suited to the needs of a society equally at home in highland mountain pastures as it was controlling lowland urban centers across Central Asia. With a direct hand in commodity production and trade along the Silk Roads, the Qarakhanids shaped Eurasia's largest nomadic empire before the Mongols, stretching their political and economic armature from Western China to the north of Iran and the Caspian Sea for more than 200 years (late 10th to 12th c. CE) (Golden 1990).

Paradoxically, however, very little primary archaeological evidence exists to reconstruct details about the Qarakhanid's nomadic strategies, social and economic diversity and integration, to their related innovations in architecture, urban planning, and industrialization. Fortunately, in 2011, an international team of archaeologists from Washington University in St. Louis and the Institute of Archaeology in Uzbekistan (led by the authors) discovered a new (7 hectare/17 acre) Silk Road town center buried high in the mountains of Eastern Uzbekistan (Frachetti & Maksudov 2014). Site ceramics gathered from archaeological sampling suggests that nomadic communities of the Qarakhanid Empire built Tashbulak in the late 10th/early 12th c. CE.

Tashbulak is currently one of the only known high mountain town centers constructed and occupied during the time of the Qarakhanid Empire, outside the lowland agricultural zones. The intellectual opportunity offered by this newly discovered urban center, high in the mountains of Ustrushana (Uzbekistan), provides an unique opportunity to examine early Qarakhanid art and architectural innovation, economic production, and social structure at the intersection of highland nomadic and lowland agricultural realms (Figure 1).

The mountain town of “Tashbulak” is located in a high elevation pasture zone of eastern Uzbekistan, at roughly 2100 meters above sea level (approx. 7500 feet). Site wide geophysical survey (sponsored by the National Geographic Society) revealed the dense architectural structure of the town center, which spans roughly 7ha at its core. Urban features such as a central mound (citadel), a large industrial workshop area, and a cemetery with over 350 individual burials all frame Tashbulak within a broader syntax of medieval urbanism and early Islamic conversion in the region.

Archaeological fieldwork sponsored by the Max van Berchem foundation began in June 2015. The primary goals of our 2015 archaeological campaign at Tashbulak were: 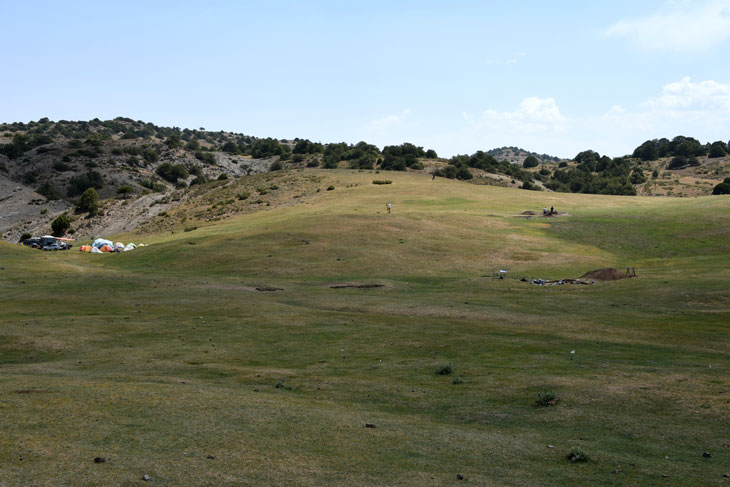 Fig. 2: The central building of the citadel

In 2015 our international team undertook targeted archaeological excavations of a portion of the residential structure on the citadel, a blacksmith workshop in the lower town, a midden, and five burials in the necropolis. Besides its architectural comparisons with other medieval cities (discussed below), our excavations documented the function and character of different parts of this highland town and provided preliminary data to discuss Tashbulak within the broader Qarakhanid political landscape.

The central building on the citadel was constructed with a stone foundation measuring 60-70cm wide and approximately 40-50cm high, based on a reconstructed height (Figure 2). Excavations of its outermost wall line did not, however, show defensive characteristics or buttressing. The recovery of typical 10-12th c. glazed pottery is in chronological agreement with coinage found at the site (below), and thus we place this occupation phase to the late 10th and early 11th c. CE (Figure 3). The overall form, location, and size of Tashbulak’s citadel structure conform to regional palace designs. 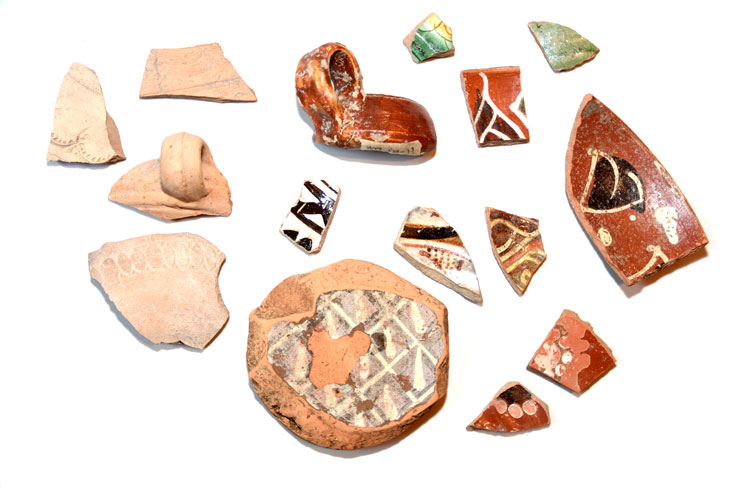 Our excavations of a metal workshop demonstrate the existence of iron working at Tashbulak, however there remain questions about the scale and diversity of metal and craft production. Qarakhanid coins excavated in the blacksmith workshop date Tashbulak as early as 975 CE, or roughly 25 years after religious conversion, suggesting Islam was rapidly and widely adopted across the Qarakhanid population (Figure 4). Abundant ceramics, slag, glazed fine-wares, a silver vessel (fragmented), glass, beads, and iron weapons/ tools together illustrate the diverse production and trade that fostered the city of Tashbulak.

Burial excavations demonstrate the occupants of Tashbulak were almost certainly Muslims, confirming that the city was built and occupied after the Qarakhanid conversion to Islam. Tashbulak burials (to date) reflect a common Muslim interment practice across gender and age ranges, thus we may speculate that religious conversion spread rapidly to the largely nomadic population in the highlands, living under Qarakhanid rule. Economically, the occupants of Tashbulak were engaged in herding of sheep and cattle as shown by archaeozoology and the recovery of coral structures – perhaps reflecting a stock market.

The archaeological results of our 2015 field campaign provide new data that is beginning the change how we understand the political, social, economic, and religious character of the first nomadic state in Central Asia to adopt Islam. Based on its architecture, planning, and archaeological remains, we argue that the site of Tashbulak as one example of a previously unknown form of highland urban centers built by nomads of the Qarakhanid Empire that served to integrate the economic and political structures of the Empire within the highland ‘nomadic’ realms of their territory. 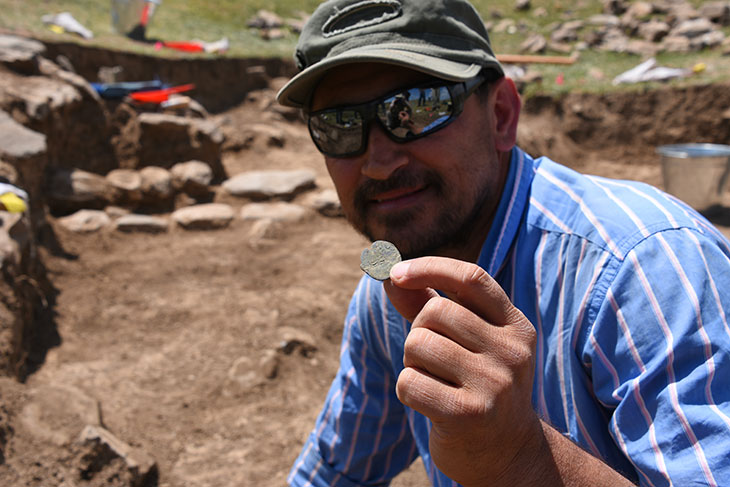 Historical scholarship typically situates the engine of the medieval Silk Road economy in the main urban centers of China, Central Asia, Iran, and the Middle East (Crawford 1953). Urban, agricultural, and mercantile populations turned cities such as Xian, Kashgar, Samarkand, Bukhara, Shiraz, Baghdad, and others, into major centers of population, political power, industry, and trade from the 8th-15th centuries. Nomadic pastoralist societies, on the other hand, are more commonly characterized as regional players whose political strength stemmed from extorting (and sometimes sacking) these Asian cities in order to gain short-lived geographic and economic control of segments of the Silk Road and its intervening territory (see Beckwith 2009).

Beyond the now deconstructed dichotomy between urban agriculturalists and (historically perceived) militant, mobile nomads, there remains a gap in archaeological data to assess the population geography, demographics, alternative patterns of urbanism and networking innovated by nomadic polities across medieval Central Asia. This lack of attention has led to a fundamental misunderstanding about the way nomadic polities and their institutions were integrated across diverse communities of Central Asia (but see Frachetti and Maksudov 2014). New discoveries in medieval archaeology – like the town of Tashbulak – now begin to show that Turkic nomadic polities, such as the Qarakhanids, shaped an alternative form of urbanism high in the mountains of Central Asia.

Perhaps the most exciting result in the 2015 field season was the discovery of a second high altitude city at « Tugunbulak », located only 3km from Tashbulak along the ancient road that we documented there. Although no work was yet initiated at Tugunbulak, our initial survey showed it is a large walled city (well over 30 ha in area) with at least 2 grand fortification towers. Surface ceramics correspond chronologically with pottery from Tashbulak.

The ancient nomadic towns at ‘Tashbulak’ and ‘Tugunbulak’ were founded as a political and commercial centers—likely in support of metallurgy—far outside the lowland agricultural zone. These sites provide the opportunity for one of the first in depth examinations of early Qarakhanid urban planning, economic production, and social organization along the Silk Roads in the early 11th century CE. The Archaeology of the Qarakhanids or “ARQ” project1 provides an opportunity for long-term, field-based research and training provided by the discovery of these new medieval cities in the high mountains of Uzbekistan. Our plan for work in the coming years, again funded by the Max van Berchem Foundation, is to continue research at both Tashbulak and Tugunbulak to provide an unprecedented understanding of this previously undocumented, high-altitude system of Islamic centers and to determine the role of the Qarakhanids in shaping the ideology, economy and political landscape of the medieval Silk Routes.

1 The wider ARQ project was funded in 2015 by a research grants from the Max van Berchem Foundation, Washington University in St. Louis, and the National Geographic Society. Logistical and institutional support was provided by the Institute of Archaeology of the National Academy of Science, Samarkand Uzbekistan.