WALKER Bethany | The Farmhouses and Fields of Medieval Ḥisbān (Jordan) | 2021

The multi-period tell site of Tall Hisban, located on the Madaba Plains in the center of modern-day Jordan, is one of the longest-running, foreign-led excavations in the Middle East. Because of the exceptional preservation of its medieval architecture, and the sustained research focus on the 13th and 14th-century remains, the site has become the rural type site of southern Syria in the Mamluk period. The fieldwork funded by the Max van Berchem Stiftung, delayed for a year and a half because of the pandemic, was conducted 3-21 October 2021. This was a critical season of fieldwork at this important Islamic-era site, as it is the final one for the study of the Islamic periods on the tell before final publication. As such, the 2021 excavation was designed to answer some of the most important outstanding questions about the medieval village, and namely the sudden and enigmatic reoccupation of these long-abandoned ruins in the 13th century, a period for which there is increasing evidence of mass migration throughout the southern Levant.

Among the accomplishments of the field season were confirmation of an early 13th-century reoccupation of the then 300-year-old ruins at the site, identification of the intrusive cemetery in the North Church as the cemetery of this migration population and the later village, excavation and study of skeletal remains from five cist graves in that cemetery, complete mapping of the medieval village through combined 3-D modelling of excavated architecture and ground-penetrating radar of unexcavated remains, careful selection of over 120 samples of soils for botanical study (to reconstruct diet, cooking practices, cropping strategies, and climate), stratigraphic separation of medieval (Mamluk) and Early Modern (Ottoman) ceramics, confirmation of local ceramic production at locations across the site, and the recovery (for the first time in five decades of excavations) of an assemblage of household metal wares of the Mamluk era.

Located approximately 25 kilometers south of Amman, Tall Hisban is a multi-period, fortified hilltop on the Madaba Plains. There is evidence at the site for 3,000 years of occupation, spanning the Iron Age through modern periods. Lithic remains, furthermore, suggest a longer history of occupation, perhaps going as far back as the Paleolithic. In the shadow of a small castle on the summit of the tell are the undulating slopes of the hill, the remains of collapsed vaults, of what was once a thriving rural settlement. The well-preserved remains of these domestic structures, confidently identified as farmhouses in recent excavations, present a unique opportunity to study in detail the inner workings of peasant life in the 13th-16th centuries CE.  Sequences of plaster and flagstone floors provide stratigraphic contexts that are rare for this period. The outstanding preservation of micro and macrobotanical remains make it possible to study in detail household activities and the relationship between the local community and the state, its representatives housed in the garrison on the hill. It is the best preserved Mamluk-era settlement, and one of the best of the medieval Islamic period, in Jordan. Because of the long-term research on this site in this period, Tall Hisban has become the rural type-site of southern Syria during the Mamluk Sultanate.

In preparation for final publication on the Islamic strata, the 2021 excavation season at Tall Hisban – delayed a year and a half because of the pandemic - was designed to address questions related to the history and development of the Ayyubid and Mamluk-era settlement and very specific stratigraphic problems.[1]  We were primarily interested in the timing and process of the resettlement of this site in the Middle Islamic period, determining who may have resettled this place then, confirming the extent of local ceramic production at this time, distinguishing Mamluk from Ottoman pottery (and specifically coarse wares) through stratigraphic separation and C14 dates, and determining to what degree the medieval village’s hinterland (defined by the Wadi Hisban watershed) was revived through terraced cultivation.

Fieldwork was conducted this season 3-21 October 2021 with five 5x5 meter squares in two fields on the tell and five graves in the North Church. The tell excavations largely focused on a cluster of vaulted rooms on the southwest slope of the tell (Field O), that now appears to have been two farmhouses built against one another and facing an open courtyard with cistern. As is the pattern across the site, most of the construction is a reuse of complete structures, wall stubs, and spoliated building material from buildings that once stood there. One of the two rooms (O12) of the North House produced evidence of a clay-working facility with tools, part of a larger ceramics workshop, in 2018.[2] In 2021, after removal of the earliest of the plaster floors, the larger of the two rooms (O9) produced the remains of multiple tannurs, complementing the recovery of a complete subterranean cookpot excavated in 2018. This room, in the phase of occupation, has been tentatively as a public kitchen. As part of the larger study of land use and kitchen culture in the Middle Islamic era, flotation of over 120 soil samples from the tannurs and other key loci continued this season. Botanical remains will be processed in labs in Germany and the U.S. 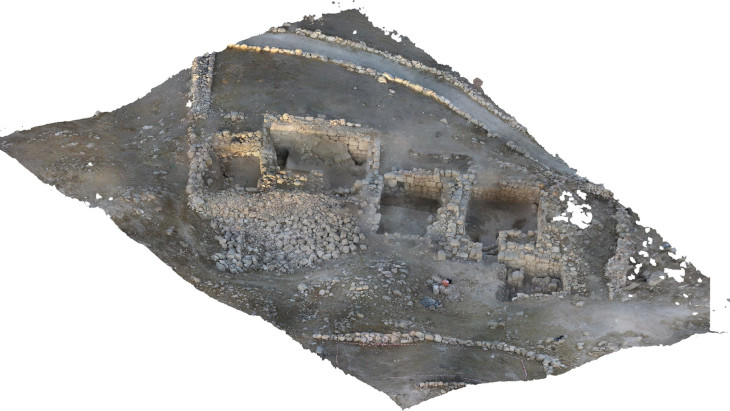 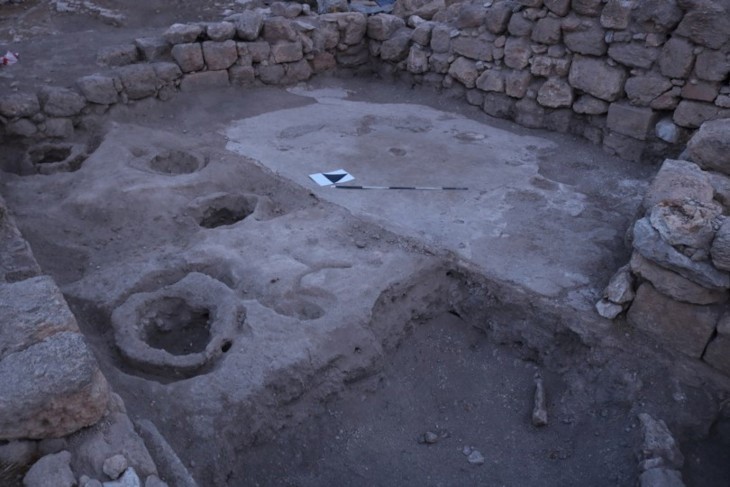 The foundation trench of the South House (O7) was identified and excavated this season, confirming an architectural phasing and occupation sequence identified at other similar building clusters across the site: the Middle Islamic reoccupation of Byzantine ruins. The west wall of the original Early Byzantine structure was retained in the Middle Islamic structure, as it was still standing (missing only its vault) in the 13th century; it was built on bedrock in ten courses, 3.5 meters to the springing of its stone vault. The pottery associated with the levelling fill of the Middle Islamic reoccupation was late Ayyubid.

Pandemic-era looting of the site in the summer of 2021 uncovered the surface of a previously unknown vaulted structure on the upper west slope of the tell, just outside the Citadel wall. In order to salvage the remains of the structure, and to explore the relationship to a cluster of vaulted buildings a few meters to the north, this structure (S1) was fully excavated to bedrock in 2021. Fully preserved, with the exception of the northernmost portion of its barrel vault, this well-built stone structure was constructed on previously quarried bedrock. The Mamluk-era construction apparently functioned as a household storeroom of the 13th and 14th centuries, yielding a wide range of table wares, storage and cooking vessels, as well as household metal implements – a rare find for this period - in fragmentary condition. The building was later repurposed as a midden, possibly from the clearance of other buildings at the site. The pottery from these upper deposits have been tentatively dated to the 19th century.

Off of the tell, and several hundred meters to the north, lies the North Church, one of at least three Byzantine places of workshop that serviced Hisban’s Christian population in the Byzantine period. Excavations in 1978 and 2018 in portions of this church revealed reuse of the church ruins as a communal cemetery in the Middle Islamic period.[3] Five cist graves laid outside the south aisle of the church were excavated this season, in an effort to investigate who may have resettled medieval Hisban after a long period of abandonment. Initial osteological study was conducted, revealing the gender and age of the individuals buried there. A late Ayyubid copper coin of the 1220s from Aleppo was found in soil covering one grave, providing evidence for a 13th-century use of the cemetery[4]; the pottery deposited on top of these graves in primary and secondary deposits are predominantly 13th and 14th-cenury handmade wares typical of the region. Future study of the skeletal remains will include oxygen and strontium isotope and histological analysis, to determine where the people who settled Hisban in the early 13th century came from and to assess the state of their overall health and diet.[5] 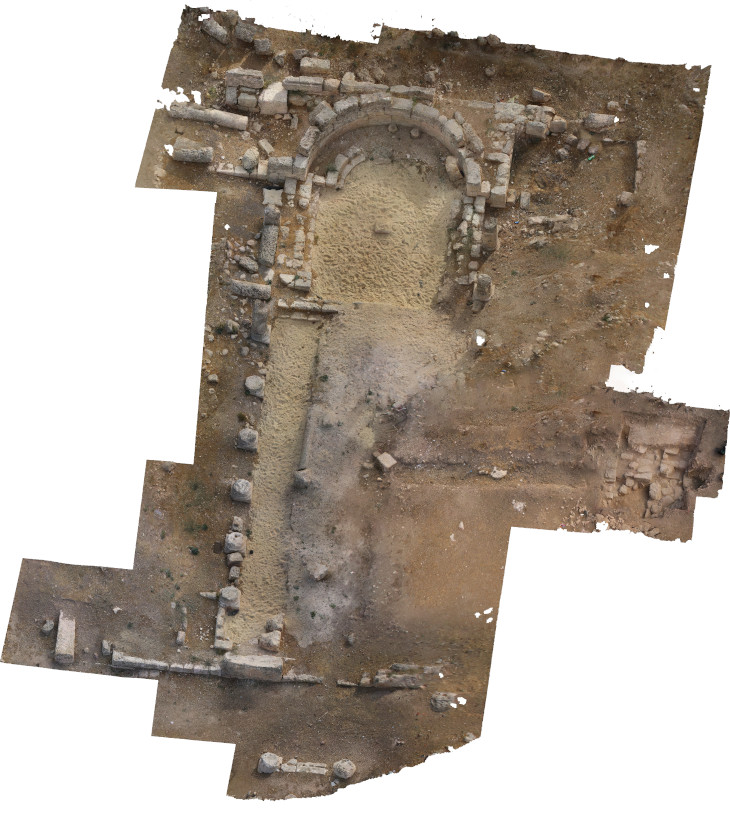 In order to create as complete a plan of the site, and document its spatial and functional evolution, photogrammetry for 3-D modelling of standing architecture was combined this season with ground-penetrating radar, to document the final plan of buildings in unexcavated parts of the site.[6] In conjunction with a series of aerial photos taken in recent years, this will enable us to estimate medieval population size, get a sense of village structure, and document growth and contraction of the village over time.

Study of the relic terraces in the Wadi Hisban were planned this season, as part of the larger study of revival of agricultural lands associated with the resettlement of the site in the late Ayyubid period and the intensification of cultivation associated with the growth of market agriculture under the Mamluks. Pandemic restrictions forced us to postpone the excavation of select terraces and soil sampling for OSL (optically stimulated luminescence) dating. We have, however, begun study of previous drone photos of the wadi to prioritize a sampling strategy for the next phase of fieldwork in the Wadi Hisban.[7]

The most important results, however, shed light on the circumstances, timing, and process of migration to this village site in the early 13th century. Ruins then two-three hundred years old were repaired and repurposed into living space, but quickly, roughly, and at least cost, suggesting a rapid resettlement. The room full of clay ovens and subterranean cookpots appears to have served as a public kitchen in this period – apparently to feed a large number of people. It was transformed into an urban house some fifty years later, suggesting a successful integration of a migrant population. The cemetery of the North Church has been tentatively identified as the burial ground of this newly (re)located population of the 13th century. As for the circumstances behind the reoccupation of this long-abandoned place, the nature of the architectural interventions and the material culture associated with this phase of reoccupation may indicate the hand of the state – a form of forced migration and resettlement. The extensive repairs, reuse, and repurposing of Roman and Late Antique ruins at Tall Hisban thus sheds light on what appears to have been the widescale resettlement of long-abandoned sites throughout southern Bilād al-Shām (Walker 2021b).

[1] The excavations at Tall Hisban are directed by this author. The core of the 32-member team was comprised of the author’s MA and PhD students and affiliated post-docs from the Islamic Archaeology Research Unit of the University of Bonn. They were joined for parts of the season by specialists from several universities in the U.S. Our 12 excellent workmen from the village of Hisban were trained and hired by the Jordanian NGO AlRaqeem. We gratefully acknowledge the local support of the Department of Antiquities of Jordan, the Municipality of Hisban, and the American Center of Research in Amman.

[2] The tools included a stylus that may have been used for incising and carving designs into molded cream ware jars. Further evidence of local ceramic production in the Mamluk period emerged this year with the recovery of a ceramic mold in O7 and a stone potter’s wheel from S1.

[5] Prof. Megan Perry (a bioarchaeologist from East Carolina University) continues to support our project with this analysis, as she has for many years.

[6] Preliminary analysis of architectural phasing based on the photogrammetry can be found in Pini 2021. The GPR work was a collaboration of Mr. Loren Cowen (University of Kiel, Germany) with Yarmouk University (Irbid, Jordan) technician Mahmoud Alwan and surveyor Walid Abuhedja.

[7] We did take soil samples from the Wadi Hisban to confirm the feasibility of obtaining OSL dates through preserved quartz. The region was previously surveyed as part of the original Hesban Expedition by Andrews University (Ibach 1987) and more recently by Gary Christopherson, University of Arizona, as part of the larger Madaba Plains Project.