Between 22nd March and 8th April 2009, and later in the year between 12th October and 10th November, the ancient city centre of Tiberias on the western shore of the Sea of Galilee was excavated by the author, under the auspices of the Hebrew University of Jerusalem (Fig. 1). 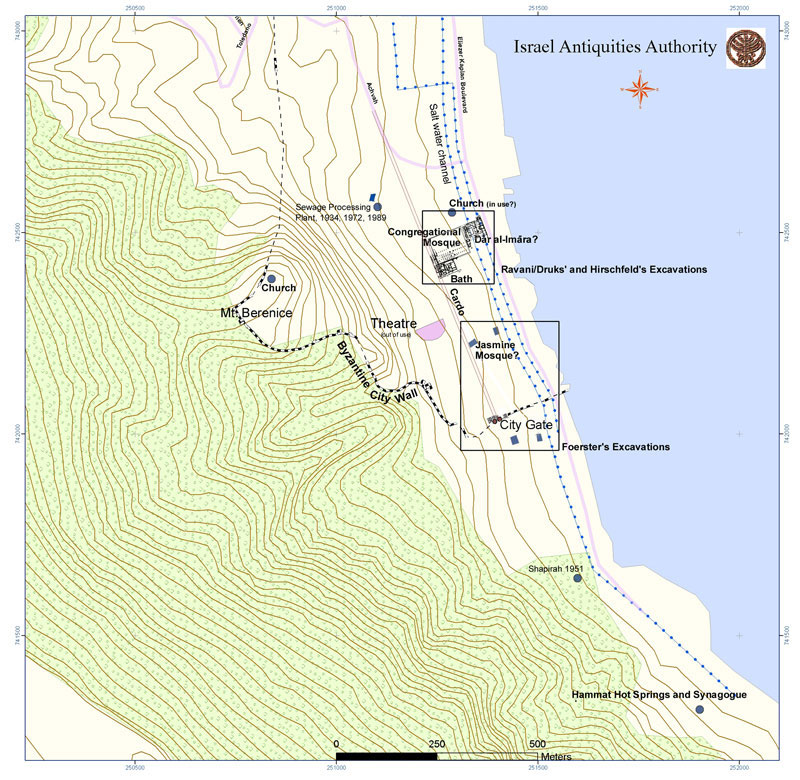 Tiberias, founded in the first century CE by Herod Antipas and an important Jewish centre from the third century onwards, became the district capital of Jund al-Urdunn during the early Islamic period, from the mid/late 7th up until the end of the 11th century. Yet up until recently, despite its historical importance in early Islamic history, the descriptive literary accounts and the many excavations undertaken since the 1930s, archaeologists remained mainly concerned with the Classical city.
In 2006, while studying the architectural remains of the Roman-Byzantine city-centre, the author posited that a pillared-building abutting the city's main bathhouse, the cardo and its shops, so far identified as a marketplace of the Byzantine period, should be identified as Tiberias congregational mosque, most probably erected under the Umayyads during the eighth century (Cytryn-Silverman 2009). With the aim of confirming this supposition, and also of exploring the various features of the early Islamic city-centre, a three-year archaeological project was initiated this year. So far ten trenches of different sizes have been opened (Fig. 2). In addition, the results from previous excavations are being re-evaluated in light of the new approach and interpretation of the site. 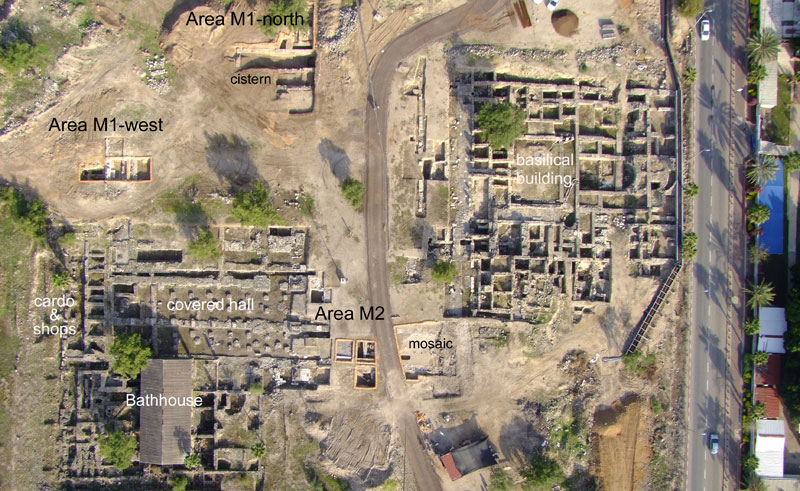 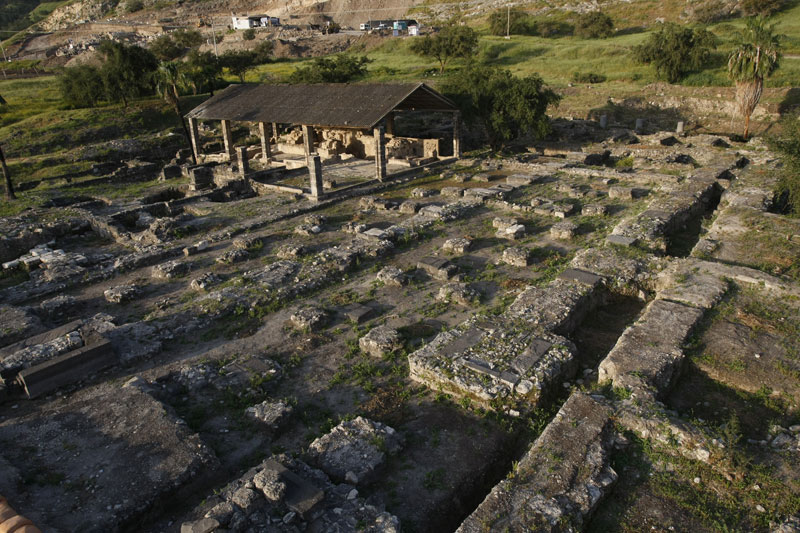 When the Israeli archaeologist Bezalel Ravani ended his seven-year excavations at Tiberias in 1959, he had exposed a large section of a monumental pillared building east of the Roman cardo and north of a Byzantine bathhouse. He interpreted this building as a Byzantine covered market, and reconstructed it as a three-aisled structure on stylobates, crossed in the centre by a row of massive pillars. The building, if reconstructed symmetrically, is a "broad house" of ca. 78 meters east-west, and ca. 26 meters north-south.
Until recently its identification as a market was generally accepted, even though the reused Jewish tomb doors as pillar bases, the remains of marble paneling in situ, the many glass tesserae from wall mosaics, as well as chains for mosque lamps, all pointed otherwise. Its direction off-south, and its dimensions which closely relate to those of the Great Mosque of Damascus (ca. 157.5 m wide, i.e. twice the size), make it more than probable that this building was Tiberias congregational mosque, the very one described by Muqaddasī in the end of the 10th century and by Nāsir-i-Khusraw in the mid-11th.
That the building came out of use in the eleventh century was clear already in 2004, when Hirschfeld excavated collapsed roof tiles over smashed glass mosque lamps typical of the period, as well as a brass chain, similar to pieces retrieved by Ravani in the 1950s (Fig. 4a) and by us during the last season (Fig. 4b). 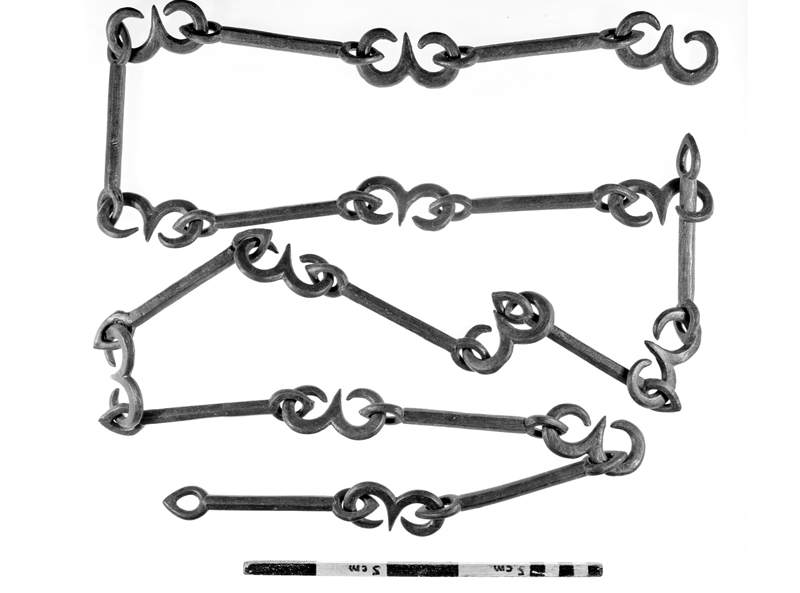 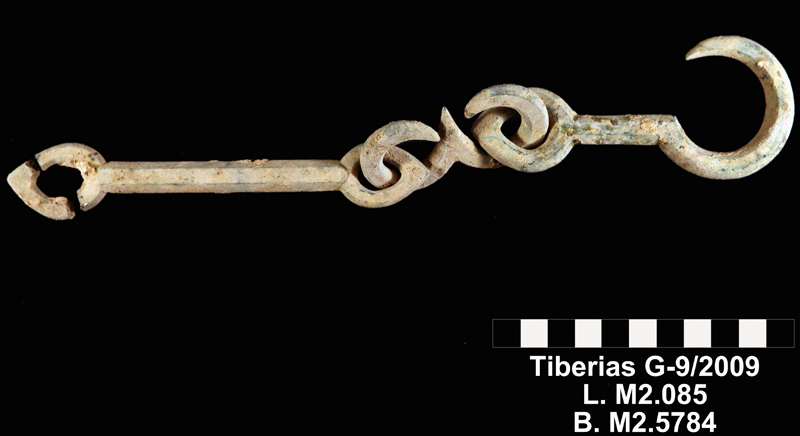 Perhaps the main difficulty in conclusively identifying the pillared building as a mosque prior to the field work was the failure to identify a prayer niche. But in spring 2009, while analyzing the area behind the qibla wall, it was noticed that a stone floor abutting it, excavated by Hirschfeld in 2004, overlies a foundation in the shape of a quarter of a circle, made of gravel and small pebbles. This feature forms a semi-circle ca. 2.9 m wide and protrudes from the back of the south wall, right in the axis of the transept, the focus of the covered hall. It thus seems safe to identify it as a protruding prayer niche. 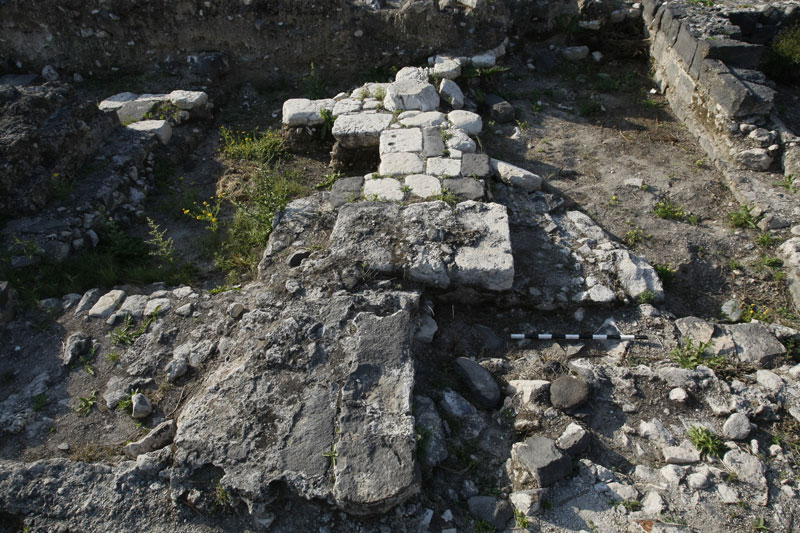 So far four trenches have been opened in the eastern side of the covered hall, which was left unexcavated by Ravani (Fig. 6). The south-eastern corner of the mosque was found, though its eastern wall has been obliterated by infrastructure works in the early 20th century. The symmetry of the hall was confirmed by the finding of sections of both middle and southern stylobates, while the chronology of the various floors, as well as that of a series of coarsely made short supports placed in-between the rows of pillars, will be possible after the careful study of the pottery, glass and rich numismatic evidence recovered from these trenches. 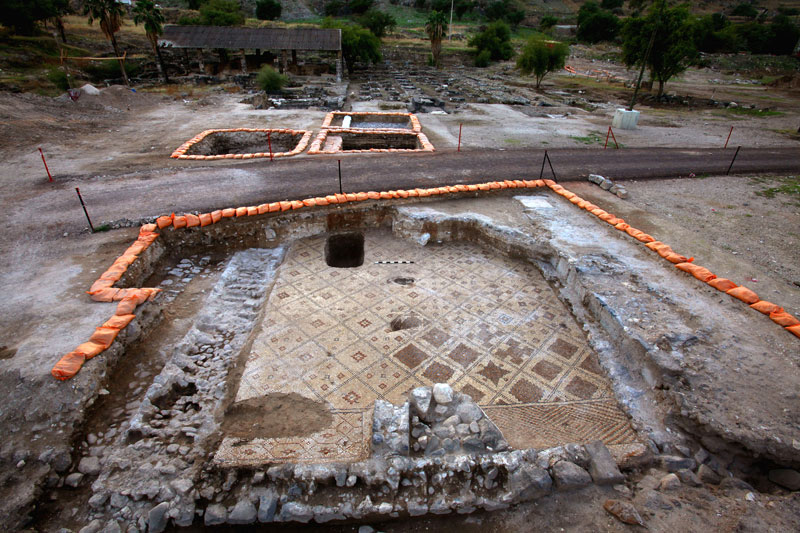 So far we have learned that the material collected from the fill underneath the earliest of these floors, thoroughly sieved, consists of Roman (mainly 2nd-3rd centuries) through late Byzantine-early Islamic pottery (6th-early 8th centuries), a high number of Byzantine minimi and many pieces of glass vessels, mostly of late Byzantine date. A few post-Umayyad pieces were also retrieved, but they originated from a disturbance, which might have been caused by the fracturing of the upper floor by an earthquake (that of 1068, believed to have destroyed the mosque?), an issue to be further pursued.
A most interesting finding in this area is that of a geometric mosaic floor, composed of large tesserae (ca. 2 cm square) and in a style characteristic of the late Byzantine-early Islamic periods (6th-7th centuries?). The mosaic, which clearly relates to a wall running north-south, west of the mosque's proposed enclosure wall, is missing its frame near the mosque's southern wall, where it was cut through when the mosque was erected. The same process is clearly seen at the foundation of the southern stylobate, which cuts through the mosaic floor.

Behind the Qibla Wall

Two trenches have been opened so far to the south of the qibla wall, with the aim of understanding the architectural remains found in 2004 and to clarify its relationship both to the mosque and to the adjacent bathhouse. So far the only consistent finds are column bases embedded in the floor which covers the protruding miḥrāb (and consequently later in date to the foundation of the mosque). Further excavations shall reveal the character of this building.

In the northern section of the site, postulated as the building's northern boundaries, two trenches were opened. In the spring a section of a well-built wall, running east-west was revealed. The wall's location was found not far from that suggested in the theoretical scheme, and was thus interpreted as the mosque's northern wall. A floor made out of light brown hard packed soil abutted it on the north, while underneath it the wall's foundation trench yielded transitional Late Byzantine-Early Islamic pottery. It is thus possible to relate it to the mosque's building phase.
In addition, the stylobate of the courtyard's northern arcade was also uncovered, in line with its northeastern corner found by the late Y. Hirschfeld's team in a memorial dig in 2008. It also had a floor relating to it, but only on its southern side facing the proposed courtyard, while to the north the wall was abutted by a deep fill of sterile soil. This abnormality seemed difficult to explain, as was the long distance of almost 7.5 m between the stylobate and the northern wall which seemed too big to be bridged by a single aisle.
In the autumn this abnormality was partly answered: while further excavating the sterile soil with machinery, an additional wall was found in-between the two architectural features already exposed. Further clearing also explained the lack of a floor in that area- an underground two-aisled cistern (Fig. 7) ca. 4 m deep, had collapsed in that area, negatives of the fallen arches still clearly seen on the plastered walls of the structure. With the aim of finding the boundaries of the cistern, we removed recent accumulations to the west of the trench to reveal the continuation of the northern wall, as well as the edge of the cistern, which end up being ca. 17x7.5 m internally. 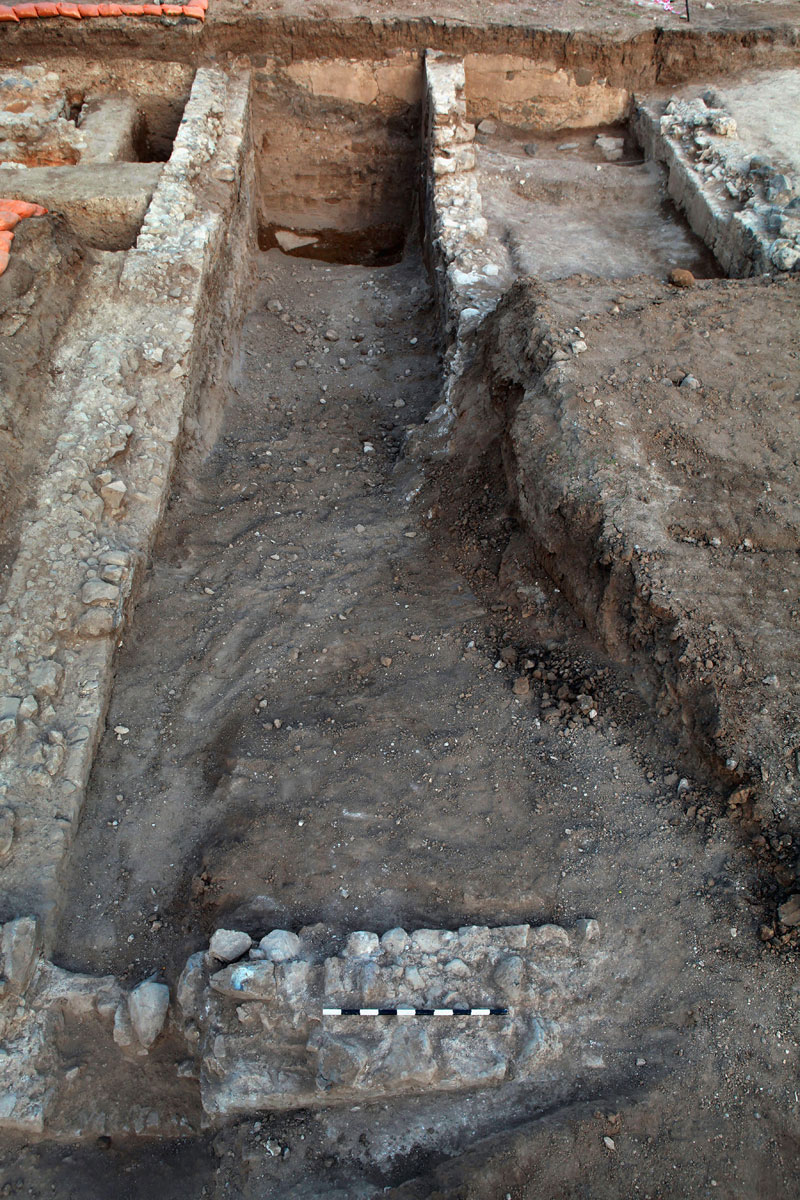 The bottom of the cistern, still plastered and covered by collapsed stones, was only reached in the last day of excavations in November.
During the next season we aim at clearing the accumulation over the collapse, to carefully excavate it, and finally reach the plastered floor and date its last days of use. In the meanwhile, we can propose that the portico's floor collapsed into the cistern, eventually filled by a sterile soil.
To the north of the mosque we found a section of a stone floor which perhaps approached the mosque. On the western side a wall running north-south seems to belong to a different unit, apparently pre-dating the mosque. A small section of a geometric mosaic floor was found in this area, and seems stylistically related to the mosaic found in the southeastern corner of the site, which clearly pre-dates the mosque. Further walls and remains of floors were excavated in this area, all producing pottery dating to the Late Byzantine period.
The importance of the excavations in this area is great due to its close proximity to the Byzantine church (fourth-fifth century), partially excavated by the Israel Antiquities Authority. Further work in this area might allow us to better understand the urban setting of the mosque in relation to the pre-Islamic planning, in which the church might have served as an important focus.

To the west of the site two trenches were opened (Fig. 8) in line with the mosque's western wall, and on the axis of the basilical building's apse (in the east, first excavated by A. Druks in the 1960s and further explored by Hirschfeld). The works have confirmed the continuation of the western wall northwards and it enclosing the proposed courtyard. It has also showed how this area relates to the cardo and its shops. The possibility of an entrance to the mosque on the basilical-building east-west axis was checked but could not be proved. 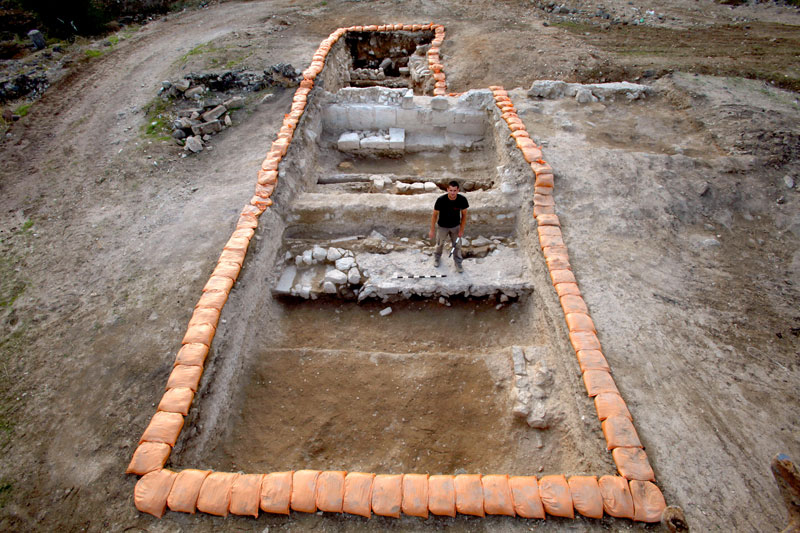 Late intrusions disturbed the area to the west of the wall, causing the excavation at this spot to be reduced. No clear levels could be associated with the mosque, though in the autumn season some deepening in this area revealed a short wall built in a east-west direction, most possibly that of a shop.
Still, interesting finds were retrieved west of the wall, including arrow-heads, a marble slab with an Arabic inscription in angular writing (Fig. 9), as well as good pottery assemblages dating to the 9th-10th centuries. The many pottery finds dating to the early Roman period (1st-2nd centuries AD) collected in this area strengthen the possibility that the western wall is in fact either a remain of a pre-Islamic structure, or that it was built over an earlier foundation, going back to the early days of Tiberias history.
In the autumn the stylobate of the western portico and the relating courtyard level were revealed, pointing to a symmetrical planning around the proposed mosque's courtyard. 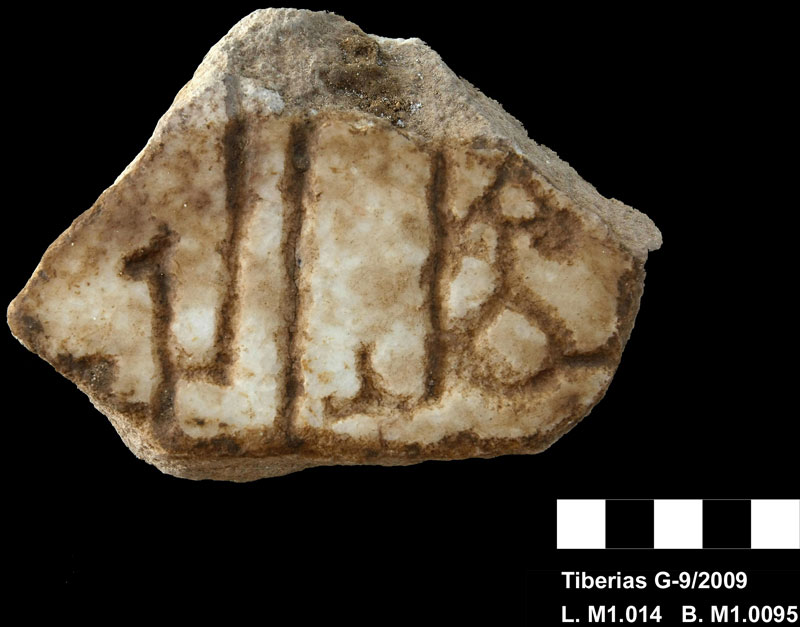 In the end of 2008 the municipality of Tiberias inaugurated a public archaeological park (Berko Park) to the south of our present excavations, at the site of the Roman city gate and adjoining remains of the cardo. In addition, much investment has been made in exposing an early Roman theatre next to the park, overlooking our site (by the Israel Antiquities Authority). In contrast, the area of our present excavations, with its monumental structures of the city-centre from Roman through Islamic times, remains outside the perimeter of Berko Park. At the moment, this area actually serves as an emergency access for the park.
It is our goal to continue our works and fully excavate the mosque, its underlying geometric mosaic and the building south of it in order to properly research and to preserve this important site. We also aim to further explore its boundaries and even slightly beyond, in order to assess and understand key features of the early Islamic urban layout and ways of Islamization of the classical city. Hopefully such encompassing works will motivate the planners to include our site within the limits of the archaeological park, which should, amongst others, stress the multicultural heritage of Tiberias.

Katia Cytryn-Silverman
The Institute of Archaeology &Dept. of Islamic and Middle Eastern Studies
The Hebrew University of Jerusalem