A grant by the Max van Berchem Foundation has been instrumental in providing me with the means to begin a study of the traditional architecture of the United Arab Emirates, in particular, to study the building traditions of Abu Dhabi and Dubai, utilising historical photographs as an archaeological resource. Almost no substantial work has been carried out using photographs as a means of gathering archaeological information on an historical built environment, and aiming to retrieve on paper, building details, elevations, and streetscapes in a manner aiming to be as comparable as possible to that expected of a more traditional archaeological research project. This project aims to do just that, but to also include a social commentary on the way in which people lived and settled in Abu Dhabi and Dubai. This study would be merely an inventory of architectural details if this perspective was not included.
A visitor to the UAE today can easily be excused for thinking that there was virtually nothing in the way of what could be described as a 'building culture' in the country prior to the discovery of oil and the wealth which it generated. In just thirty years, the towns of Dubai and Abu Dhabi with their traditional buildings constructed of coral stone, sandstone and palm fronds, have been breathtakingly transformed into exemplars of contemporary architecture. 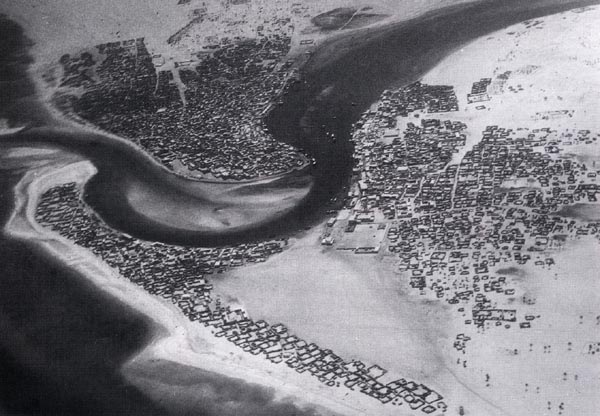 Dubai in 1951, with Shandaga in the foreground on a sandspit, Bur Dubai - the oldest part of the town - is to the right, while Deira is on the opposite side of the Creek
(reproduced with the kind permission of Mr. Ronald Codrai)

The only record of traditional architecture in this part of Arabia from tents and huts, to merchant's houses and fortifications is to be found in the photographs taken by explorers, diplomats, oil company representatives, and engineers and architects in the first two thirds of this century. These photos are a unique glimpse into the built environment of a way of life which has been altered tremendously by the discovery of oil in the lower Gulf states. The photographs being used in this study were taken by the explorers H. Burkhardt and Wilfred Thesiger, the diplomat Sir Rupert Hay, Ronald Codrai, of what was the Iraq Petroleum Company, architects of the JR Harris Partnership (London), and Hunting Aerofilms. A considerable number of photographs have also come from the archives of the Abu Dhabi Company for Onshore Oil Operations (ADCO), and I am in the process of acquiring photos from the archives of British Petroleum.
The photos range in date from ca 1906 to the early 1970s and cover a variety of subjects. Nevertheless, a very large corpus of images exist showing what the traditional built environment of Abu Dhabi and Dubai was like, and with enough details to be able to analyse the spread of different building types and building details. For example, the pre modern townscape of Dubai consisted of three distinct units. The oldest was Bur Dubai on the south side of the Creek which divides the modern city. This part of the town was mapped by the British in 1822 and it is possible that its extent and outline can still be discerned in the 1960 map compiled by Hunting Aerofilms. Bur Dubai was surrounded by a wall in the last century and included within its perimeter the Friday Mosque and perhaps part of what is now the Fahidi Fort. To the west of Bur Dubai, along the sea front and separated by a shallow embayment which flooded at high tide was Shandaga. Separated from both of these town centres, on the other side of the Creek, was Deira. It is quite likely that Shandaga was settled by tribes people who left Abu Dhabi in 1833, while Deira could have initially been settled in 1840 and 1841 when many of the inhabitants of Bur Dubai decamped across the Creek to escape the spread of disease.
Pre 1960s photos show both Bur Dubai and Deira as being quite densely built over with a wealth of traditional architecture and many windtower buildings. Both of these parts of the town had substantial markets with a mix of domestic and commercial buildings, and with a fair number of inhabitants who hailed from Persia and South Asia. On the other hand, Shandaga appears to be more domestic in appearance, with no market place, some commercial buildings along the Creek, and in relative terms, fewer windtower houses than in the other two parts of the town.
The windtower undoubtedly spread from the northern side of the Gulf to the Arabian coastal towns. At Dubai they were most numerous in its two commercial centres, Bur Dubai and Deira, but not so obvious in Shandaga - an area reputed to being occupied by tribal Arabs living close to the residence of the Sheikh of Dubai. The extant photos of the Shandaga area show an architecture which appears to be low lying and simply decorated, quite often with only pointed corner merlons along the roof lines. This is in contrast to the decorative parapets, veranda and windtower details which were so common in Deira and Bur Dubai. 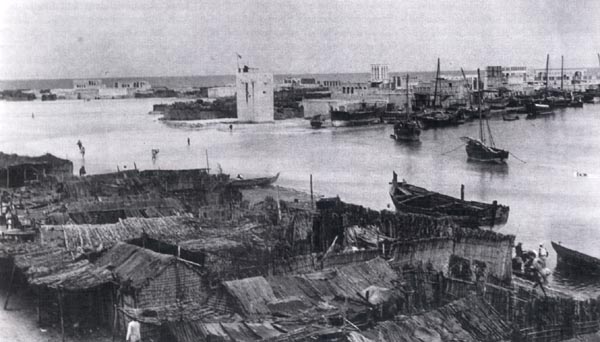 Dubai pre 1950, with Shandaga in the background, and arish structures in the foreground on the western fringe of Bur Dubai
(reproduced with the kind permission of Mr. Ronald Codrai)

Abu Dhabi had an architecture very similar to that at Shandaga. Although much of the town consisted of palm frond (arish or barasti) structures, the stone buildings had what could be described as a 'blockiness', and had a scarcity of decorative details, usually no more than pointed corner merlons. Even the windtower buildings which were present in the town did not have the same degree of decoration as those in Dubai, nor the highly decorated porches which were quite numerous in the latter town. The archaeology of the built environment recorded in early photographs suggests different types of groups of people in different occupations and lifestyles, and even different ethnic backgrounds making up the cultural mix of the respective towns.
Aerial photographs taken by Ronald Codrai in the 1950s and by Hunting Aerofilms in the 1960s illustrate very clearly the way in which the towns of the UAE had large areas of palm frond (arish) structures surrounding them. It could be argued that such buildings were the main stay of vernacular architecture in the UAE with only the better off being able to afford stone buildings. Even the tribes who led a nomadic lifestyle drew upon the date palm for building materials. Photographs by both Thesiger and Codrai show that it was not unusual for the typical Bedouin tent to consist, not of camel or goat hair cloths, but mats made of palm fibres. The Summer (and sometimes permanent) houses of these tribes people, deep in the desert in the Liwa Oases, also consisted of arish, though the photographic record indicates that their method of construction differed from the way in which arish structures were constructed along the Gulf littoral.
In the Liwa, arish structures had walls which were supported by vertical palm tree trunks while their roofs appeared to be slightly vaulted. Such vaulting could easily be made by bending together palm leaf stems. Along the coast however, and in Dubai and Abu Dhabi, arish houses were supported by imported mangrove poles (chandals) with gabled roofs which also had ridges made from mangrove poles. In fact, the photographic record for the UAE in the pre oil era shows that there is a typology of scrub and palm frond structures (including tents) just as there is a typology of stone and mud buildings.
This study is far from complete, and what I have tried to do here is to illustrate some of the ways in which historical photographs can be used to give us insight into the make up of societies, even in the recent past. Some of the photographs I have compiled can even give us a glimpse into the trade connections of the UAE ports since they show shop scenes wherein inventories of goods for sale can be made. However, this study has to limit itself to the built environment and the way in which an archaeology of a past milieu can be reconstructed from the only record which exists for that past - photographs.