The Citadel of Homs was built during the period of militarization of the Near East that resulted from the Crusader invasion of the Islamic lands and it must have been one of the largest fortified sites in Muslim hands in Syria at the time. An etching by C. F. Volney dated to 1785 shows the Citadel still in excellent condition, dominating the south side of the city of Homs. However, today the Citadel is in ruinous state as a result of massive demolition started by the Egyptian army of Ibrâhîm Pasha in the 1830s. This was followed by levelling and extensive new construction carried out when the site was used as a military base by the French army during the Mandate period and thereafter by the Syrian army. The Citadel was only abandoned for military purposes in the late 1980s when it passed to the Syrian Directorate-General of Antiquities. The effect of this widespread destruction, especially that dating from the French Mandate period, has meant that the archaeology at the site has been masked by redeposited fill or, in some places, destroyed completely. 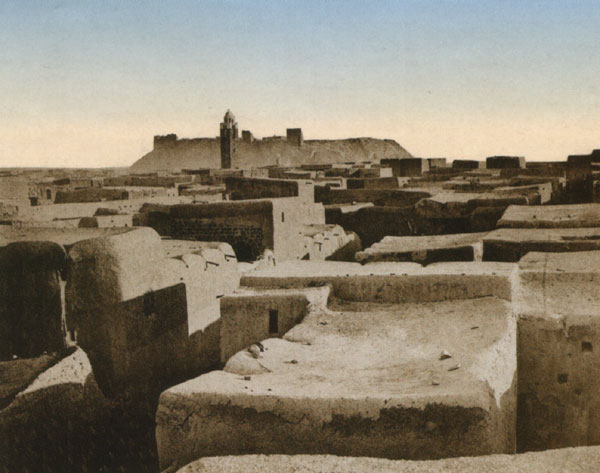 At the instigation of the Syrian Department of Antiquities, in 1994-5 a joint Syrian-British team was formed to map and excavate Homs Citadel. The director on the Syrian side is Mr. Farid Jabbour of Homs Museum, and the present writer leads the British team from SOAS, University of London. The first season of excavation commenced in 1997 and made the greatest progress in Area C on the south side. In the central areas of the tell a combination of deep fill laid down by the French, large 20th C. water tanks, telecommunications aerials and other structures have put much of the mound permanently beyond archaeological retrieval.

Excavations in Room 1 in Area C have proven that it was related to a suite of at least four rooms abutting the south curtain wall of the Citadel. This wall was probably constructed in the Ayyubid period, as Max van Berchem and E. Fatio recorded inscriptions of 1198 and 1202 in the name of the Ayyubid prince of Homs. Shirkûh II on the surviving northern towers. These inscriptions have now vanished and so too has an inscription recording restorations by Baybars I in 1271, once set in the NE gate.

Room 1 provided evidence of a major re-building of its superstructure at some unknown point when the vaulting system, originally on an east-west alignment, was altered to spring on a north-south alignment instead. Room 1 has an arched doorway entering it from the east via a flight of steps: at the levels reached so far, there is no connection between Room 1 and Room 2 to the west. As to Rooms 2-4 (and a putative Room 5), they seem to constitute one continuous suite. The walls defining the entirety of Rooms 1-4 in Area C are extremely wide, built of large blocks of basalt and mortared with a good hard lime plaster. It is quite clear that these walls were designed to carry a very substantial vaulted superstructure.

Whereas the internal walls of the Islamic Citadel are exclusively of local basalt, and basalt blocks appear in the curtain walls of the tell periphery, a distinctive white limestone is also used, finely cut in blocks of great size. Numerous examples of this calcareous masonry were found toppled in Area C. The purpose of these impressive white blocks is explained by the appearance of the standing towers on the northern side of the Citadel, where limestone blocks are used to face certain exterior surfaces to make them more striking and stronger. The limestone is an import to Homs and it is possible that it is reused Roman masonry from Rastan (Roman Arethusa) just to the north, the foundations of whose ashlar city walls are built of limestone blocks very similar in size to those at Homs.

A major alteration to the Citadel in the mediaeval Islamic period involved the construction of a thick and massive glacis in basalt which concealed earlier Islamic fortifications. The date of this glacis is unclear as yet, but we take it to be post-Ayyubid.

In the redeposited fill that we excavated on the south side, in the centre and in the northern parts of the tell we found a range of finds including Roman terra sigillata and mosaic cubes. Mosaic clusters set in plaster suggest that a mosaic pavement was smashed when the French army redeposited the fill. An oil lamp with a cross was of Byzantine date, but like so many of the finds from the 1997-2000 seasons, it was not from stratified levels.

The excavations in 2000-2001 in Rooms 1 and 2 in Area C reached a series of sealed earth floors that covered an earlier level of loose masonry blocks. In the upper sealed earth floors we found 16th C. AD Chinese blue and white porcelain, suggesting continued use of Room 1 on into the Ottoman period. However, the persistent presence of Tell Minis wares points to activity in the 11th-12th C. AD while pottery of 13th C. AD and of later date points to activity continuing into the Mamlûk period. A nearly intact pilgrim vessel from Room 1 decorated with lions in relief is possibly 13th C. AD. An Ayyubid or Mamlûk blue glass sherd with fine gold enamel decoration found in fill points to a level of luxury at the Citadel while a stack of carefully piled river stones outside Room 1 we took to be the ammunition for a catapult, reflecting the site's military character.

As with the other great Islamic fortifications of Syria like Hama, Aleppo and Qalcat Jacbr, the construction of the mediaeval walls and towers of Homs Citadel would have involved the destruction of older buildings. Our excavations at the site since 1997 have suggested that whatever preceded the Ayyubid fortifications around the perimeter was levelled when the defences were built. However, a Roman and Byzantine occupation of the Citadel tell is indicated by some of the finds from our excavations, as we have seen: the only possible Roman or Byzantine structural evidence that has been identified so far is the lower part of a well shaft and staircase in brick that cuts down vertically through the centre of the mound.

Ceramic vessels retrieved from just above bed-rock at the base of the SE side of the tell indicates that the earliest settlement at the site goes back to the 3rd millennium BC. However, the narrowness of the archaeological areas that are safe to excavate preclude any chance of reaching these lower levels by coming down from the top of the tell, given its height of ca 30 m.

The British team excavation at Homs in 2000 and 2001 has received generous support from the Fondation Max van Berchem, the Council for British Research in the Levant (CBRL) and the Seven Pillars of Wisdom Trust, for which we are extremely grateful. A lengthy report on our research and excavations down to 1999 is at press in the CBRL journal, Levant.