In 1983, we began a project to map Samarra, a project which is now reaching publication. The work has been generously financed by the Foundation since 1991. The first volume, the Historical Topography of Samarra, is now going to press with the help of the Foundation, and the second, the Archaeological Atlas of Samarra, will be ready in 2004.
It was not originally intended to spend so long a time on this project, though we were aware that the quantity of archaeological data was exceptional, 58 km2 of built-up area spread over 2002 km, and 6908 units have been registered. The objectives, however, have been attained. The aim was to record the entire area of fired brick, mud-brick and pisé mounds. At first the objective was principally one of rescue archaeology, a need to be found everywhere round the Middle East, where modern economic development has put nearly all archaeological sites in danger. Register what exists, and at least you have a record for future study, a record which one hopes may influence the policy decisions of governments and private developers. Samarra is particularly fragile, as a bulldozer can remove a substantial area in a morning. However, in the end, war and economic sanctions proved to be the problem. Although neither the bombs of 1991 nor 2003 touched the site, the imposition of economic sanctions forced Iraqis to cultivate much larger areas of land, including the ploughing up of substantial areas. The American occupation has led to further issues. Recently, a battle took place in the streets of Samarra (30 November 2003), which resulted in damage to the town, and the manoeuvring of tracked vehicles has certainly damaged the archaeological site. Fortunately, at the request of the American advisor at the Iraq Directorate of Antiquities, John Russell, I have been able to send marked-up satellite images, to show the extent of the archaeological remains. 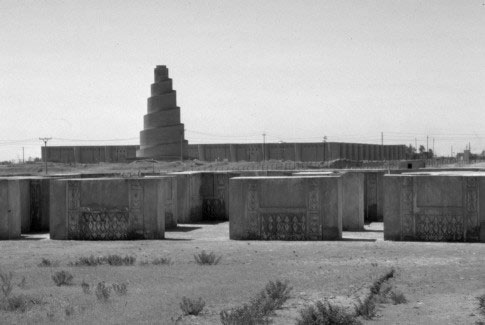 1. The Spiral Minaret seen from House no. 5

While the value of archaeological recording has thus been dramatically illustrated, planning such a large site has also led to new areas of research. Samarra is, in fact, the largest ancient city in the world for which we have a nearly complete plan. Although Chang'An, the T'ang capital in China, or ancient Tokyo, may once have covered larger areas, we know very little about them, other than that which can be derived from texts. The existence of a semi-complete plan shows that you cannot simply reach conclusions based on global area and estimates of population. The history of each quarter has to be studied, when and why it was founded, who lived there, how it developed, proportions of different types of housing, and industrial establishments. The combination of archaeological and textual evidence is vital.
The methods available have advanced much through the development of computer technology recently. At the beginning, we made a photogrammetric map based on air photographs dating to 1928 and 1953. With the wide availability of scanners, we were able to digitise the air photographs in 1995, and study every mound in as great a degree of detail as you can see on the ground. The main lack is that on the ground you can commonly see the actual wall faces, and from the air there is less precision in measurement. As is typically the case in archaeology, old photographs are better than new, for the remains are better preserved. For this reason, the maps are retro-projected to a date of 1924, also to include more remains now covered or destroyed. In 1995, the United States declassified high-resolution 1960s satellite imagery of the CORONA series. Although of lesser resolution than the air photographs, these images have given a complete coverage of the region, and it has been possible to add in unknown elements on the periphery. Recently Professor Elizabeth Stone of Stonybrook University has provided us with low resolution ASTER imagery from the last year, and we will be able to correlate our older photographs with the current situation. 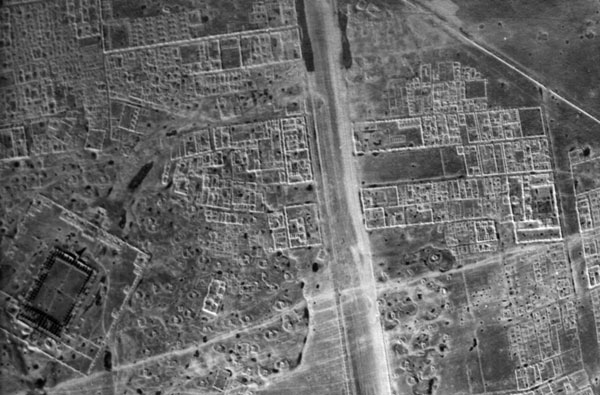 2. Air photograph of al-Mutawakkiliyya and the Abu Dulaf Mosque, dated 1953.

It is probable that we have been able to recover every structure of the Abbasid city and its surroundings that survived into the 20th century. Evidently, from the air, not everything can be well dated, though there are usually arguments for a preliminary dating. Further detail will have to wait for future work on the ground. However, we are hopeful that as great a knowledge of Samarra as is possible under the present circumstances has been preserved for scholarship, and for the people of Iraq.

For further information, see our web site at http://www.dur.ac.uk/derek.kennet/samarra.htm.