In 1982, the opportunity occurred for the first Western work on the Abbasid capital of Samarra' on the Tigris (AD 836-892), since the German expedition of Herzfeld and Sarre in 1911-13. Herzfeld had had only a short time in the field (20 months in total) to work over the vast area of the city - 57 km2 of collapsed walls, and much has remained untouched. The central question was, and remains, simply to discover and record what there is at Samarra'. But it was also clear that surveying by normal methods on the ground would not be completed in a country where the danger of interruption for political reasons was always great, as has actually occurred. By good fortune, air photographs which could be used for photogrammetry were found.
We have used standard methods of air photogrammetry, as used for map-making since the Second World War, and modern CAD techniques, to create a set of plans of the city, and of individual buildings. This has been supplemented by survey work in the field. In 1983 we surveyed the ground control of the air photography, and University College London made available their photogrammetric equipment for plotting the photographs. In two more field seasons in 1987 and 1989 much new information was gathered, but unless the political situation in Iraq improves it is unlikely to be possible to work further. 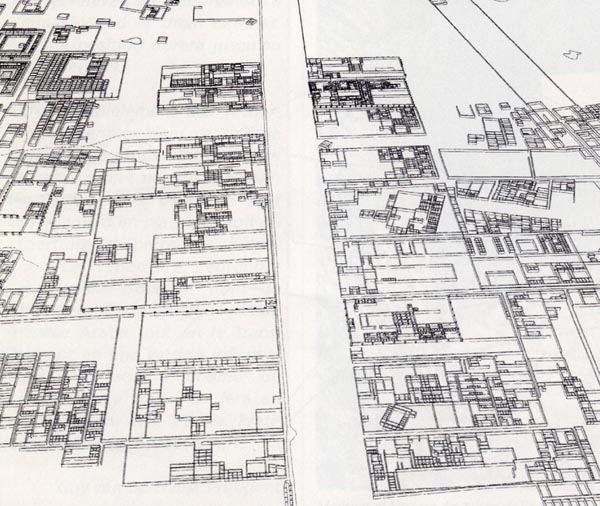 A. Northedge. Samarra' : Perspective view of the houses on the Grand Avenue in al-Mutawakkiliyya

However, in spite of the evident technical interest of recording such a large archaeological site, the real interest of the project lies in the very large quantity of information about the history of the Caliphate which it makes available : the number of about 5500 buildings of the 3rd/9th century recorded outweighs the total of other buildings known from the Early Islamic period. There is new information for architectural history, for example the evidence that the octagonal city at Qadisiyya is the unfinished city of al-Mubarak begun by the Caliph Harun al-Rashid before 180/796, or the plans of the palaces of al-Istabulat, al-Musharrahat, and al-Ja'fari. 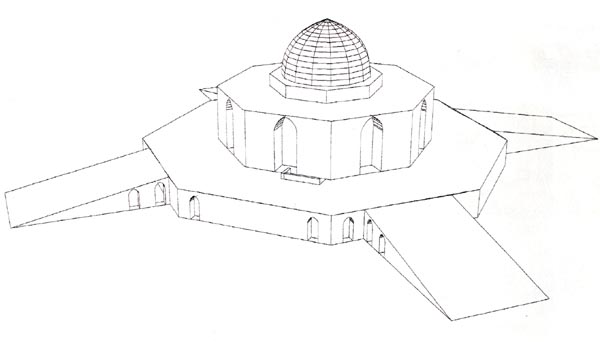 A. Northedge. Samarra' : Perspective view of the houses on the Grand Avenue in al-Mutawakkiliyya

But the entire range of different building types from 3rd/9th century Iraq is also evidently to be found there. Courses for horse-racing, polo maydans, and hunting reserves have been recognized, but also, with the help of al-Ya'qûbî's description of the avenues of Samarra', it has been possible to identify a building used by a dîwân : the Dîwân al-Kharâj, whose plan can scarcely be differentiated from that of a palace. Al-Ya'qûbî helps the identification of the houses of particular personalities : what sort of house did the Qâdi al-Qudât occupy ? At the other end of the scale, a range of industrial buildings have been located, the purpose of only some of which can be recognized. The evidence for the cantonments of the army - the equivalent of Roman legionary camps - is excellent, and Samarra' also has one of the best preserved plans of an Islamic palace city, al-Mutawakkiliyya, with many buildings of as yet unknown function.
At present, with the help of the Foundation, the basic information archive of plans and maps is being prepared for publication, together with a catalogue, and we hope that this will take place within the next two years. There will also be a study of the historical topography of the city.