The Arrifana Ribât (Algarve. The Study of the Necropolis | 2014

The Arrifana Ribât, which we identified in 2001, was established by the sufi master Ibn Qasî in approximately 1130 and abandoned in 1151. It is considered by many researchers, who study the Islamic presence in the West, to be one of the most remarkable archaeological discoveries of the 21st century. Gradually, for some months once a year, the authors carry out archaeological excavations, aiming to understand this exceptional site not only using the field evidence but also through the possibility of crossing archaeological information with literary data. In July 2013 the Arrifana Ribât was classified as a National Portuguese Monument[1].

Fig. 1. The Peninsula of the Ponta da Atalaia (Aljezur) and the exhumed structures of the Ribât of Arrifana.

To the east of the Peninsula da Atalaia (Aljezur) where the Ribât was built, a necropolis (maqbara) was recognised that was originally surrounded by the wall that enclosed the space of the Ribât, but also would have occupied the attached exterior space. Sixty-one graves were discovered, orientated northeast-southwest indicating a disposition to bury the corpses in lateral decubitus positions with the head directed southwest and the face turned southeast (Mecca), aspects that the recent digging of seven burial pits with osteological remains has confirmed. Nevertheless, three graves were oriented north-south, forming a group distanced from the other graves (Christians?). 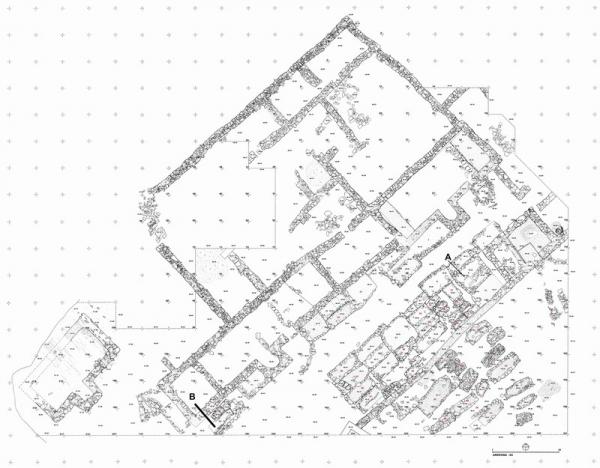 Fig. 2. Three mosques, madraza and necropolis from Sector 4, with stelae (A and B), of the Ribât of Arrifana (after R.V. Gomes and M.V. Gomes).

All of the graves have a rectangular plan but are different sizes, some lying next to qiblas of mosques or the wall mentioned above. They are marked by very shallow tumuli bordered by low walls of stones and filled with earth, and in some cases, covered by rocks, namely white sandstone. The majority of the graves were marked by small anepigraph stone stelae (sahid), found erected in situ and two examples constitute exceptions as they contain long texts. Another grave (40) had only a very small schist plaque with an engraved name, possibly of the deceased (Uhmân). 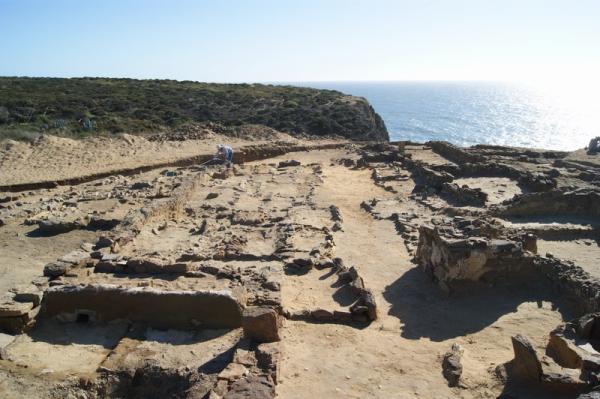 One of these inscribed stelae (A) was found in the southern corner of a tumulus (grave 4), with three texts divided into eight lines. It contains information about the identity of the individual buried there, including his name, age at the time of death, the date of which this occurred, and phrases concerning his religious character. The main text was dated to 461 H./1069 AD, along with a small fragment of the Quran, written between 485 and 495 H./1094-1102 AD, and a small inverted word on the base of the monolith, perhaps from before 505 H./1112 AD.

It becomes difficult to know whether the epitaph, which was reused in more recent times than the date registered on the tombstone, was in situ at the site where the Ribât was built, or whether it was transferred there from a small village (qarya) located nearby. We should keep in mind that Ibn al-Hatîb (1313-1379) in the Kitâ amâl al-alâm[2] mentions the fact that Ibn Qasî had founded his Ribât in a qarya galla or important village[3]. 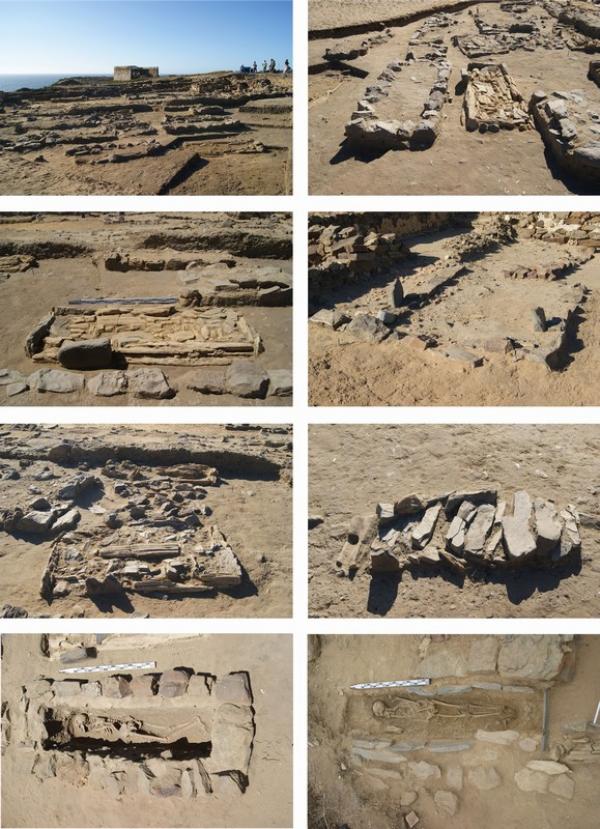 The other epigraphed stele (B) was erected on the southeast side of grave 54, fixed to the ground with a crown of small stones that were intermixed and mortared with earth. It marked the grave of a man who died in 1148, probably from Ibn Qasâ's close circle or one of his murîdîn, killed in the battles against the Almoravids.

Thanks to the support of the Max van Berchem Foundation, this year we excavated seven of the graves identified (9, 43, 49, 50, 51, 54, 59) and their forms, dimensions, and positioning of the corpses indicate that they were buried in pits, deposited in lateral decubitus, with their arms gathered tightly to their abdomen and legs slightly bent. In this context, it is important to remember that the Prophet called for the simplicity and even absence of graves and the equality of all in death. One of the rules followed in building the tumuli states that these were not supposed to be more than one hand span in height. 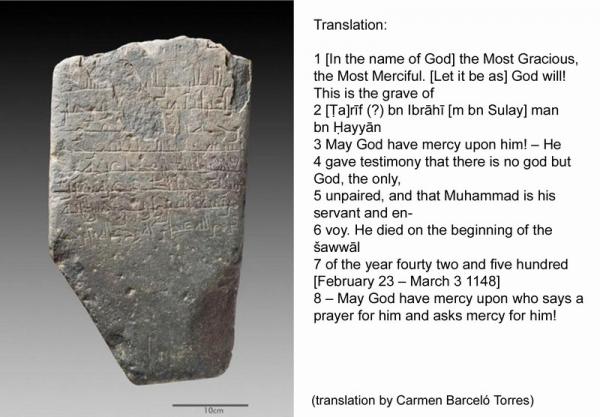 A building located in the north-eastern part of the necropolis provided a bench, storage for water, and a basin dug in the soil. The floor and walls were well coated with a paste rich in lime, that in our interpretation mainly based on parallels seen in modern day rooms for preparation of the dead, was the bayt al-janaez, the first of its kind to be identified in the former territory of al-Andalus.

Five of the human remains identified in the necropolis's excavation belong to adult male individuals, one to a child of approximately twelve years whose gender could not be determined, as well as one female, a young adult. No signs of violence were detected as a cause of death in any of them, nor severe bone trauma or infections.

According to the anthro-biological study performed, dental caries constitute the most common pathology. This is most certainly due to a lack of oral hygiene and diet. Cribra orbitalia was found in two individuals: the woman and the child, indicating a diet poor in vitamins and iron. Discartroses was observed in all of the mature adults often accompanied by osteoarthrosis and in one, even a case of osteomyelitis. Among the injuries caused by accident or conflit we can include a fracture of the first phalanx of the foot (grave 43).

From this sample buried in the Ribât now under investigation, we can conclude that the population was short to medium in stature, unhealthy, and had a diet that was poor in iron and nutrients.

Both the architecture of the tombs in the necropolis of the Arrifana Ribât and the absence of the remains of cultural material, as well as the physical condition of those who were buried there and have been studied until now, show not only the difficult conditions they lived in but also the austerities associated with death.

The continuation of excavations and the study of structures, namely graves, along with the artefacts discovered will contribute to a greater understanding of the important historical period featuring Ibn Qasî and the community he founded.

[4] In addition to the authors of this text, the following are also part of the multidisciplinary research team for the Ribât da Arrifana: the Professors Miguel Telles Antunes and Pedro Miguel Callapez (Zooarchaeology), João Pais (Archaeobotany), Nathalie Antunes-Ferreira (Anthropology) and Carmen Barceló Torres (Epigraphy).

This project is sponsored by the Max van Berchem Foundation, established in 1973 in memory of Max van Berchem (1863-1921), the founder of Arabic epigraphy. Based in Geneva, the aim of the Foundation is to promote the study of Islamic and Arabic archaeology, history, geography, art, epigraphy, religion and literature.

Table 1. Overview of the anthropological information from findings in the Arrifana Ribât (after N. Antunes-Ferreira).