The castle of Palmyra (so called castle of Ibn Ma'an) on a hill west of the ancient city has been traditionally attributed to emir Fakhr ad-Din II (1590-1635). However, Druze sources say that Fakhr ad-Din captured Palmyra and its castle in 1630 and strengthened the castle's walls. A 13th-century chronicle (al-Tarikh al-Mansuri by Ibn Nazif al Hamawi) informs us that the Ayyubid ruler of Homs al-Malik al-Mujahid Shirkuh built a fortress on a high hill in Palmyra around 627 H./1229 A.D. If the castle were indeed an Ayyubid construction, then its excellent state of preservation (including some of the upper battlements) would contribute in an important way to the study of the art of fortification and the architecture of power that developed so prominently in 13th-century Syria. Our survey, begun in 1990, was resumed in 1993 with the help of the Max van Berchem Foundation. 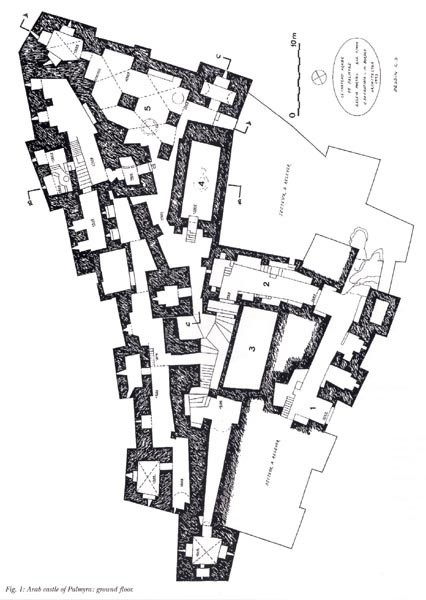 The castle seems to represent a type different from both town citadels such as Aleppo, Damascus or Bosra and princely foundations conceived as centers of fiefs in frontier marches like Harim, Najm or Dja'bar. There is no mosque here, bath or palatial establishment. Probably this castle was a garrison fort with purely military and policing functions. 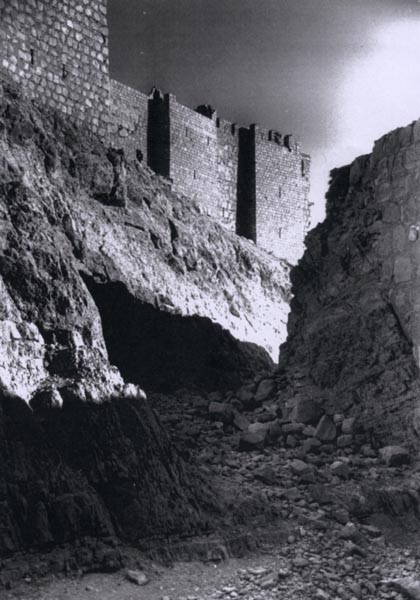 The building is a cluster of towers with very short stretches of curtain walls. In its final phase, all the space within the enclosure became covered by vaults on two or three levels, except the central staircase. The essential elements of the design are two-floor towers with battlemented terraces and machicolations on the terrace level, and vaulted galleries adjoining the towers and curtain walls. In the inner core there are cisterns, vaulted halls (3,4), one large room where a flour mill and food silos were installed (5) and the big hall of rather official character above the inner gateway (2). 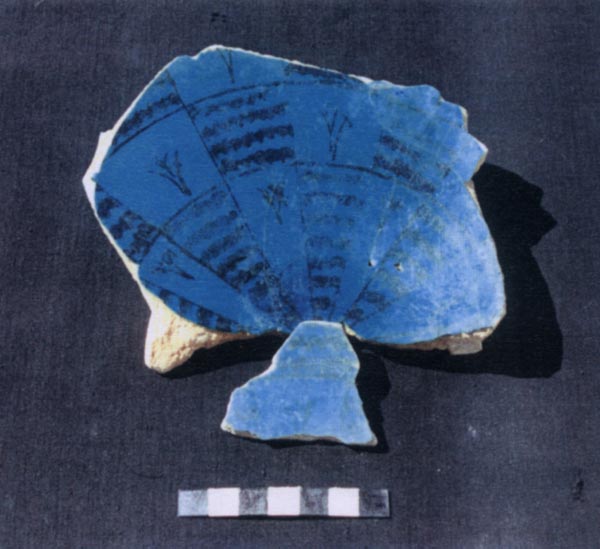 The 1993 survey resulted in recognizing several construction phases, the effect of which was enlargement of the enclosure and raising of the towers and walls. All these extensions must have occurred within a short time after the establishment of the castle judging by the masonry which is essentially the same in all the phases. At an unknown moment the western wing was partly destroyed (an earthquake or enemy action ?), and later repaired with a distinct type of masonry, which is the only one that perhaps might be attributed to the Ottoman period.
Our major concern was the date of the whole complex. To determine it we first analyzed potsherds collected from the surface inside the building and on the slope of the hill, where it is supposed that rubbish from the castle was dumped. Among these surface finds, the majority of recognizable glazed pottery belonged to typically 12-13th-century Syrian classes, and 14th-century Mamluk underglaze painted vessels. Later during the survey, clearing parts of the interior and a few sounding trenches through floors of some halls and terraces brought stratified pottery evidence. Fragments of red-clay lead-glazed vessels were found together with terra-cotta tobacco pipes and pieces of cloth, mixed with animal dung, in strata covering already partly destroyed installations and floors. This is the only type that can be dated to the Ottoman period. On the other hand, fragments of glazed pottery whose date cannot be later than middle 13th century on stylistic ground , were found in the fill of some vaults and in the thickness of floors. Judging by this pottery evidence, the castle was constructed in the 13th century and used mainly in the 13th and 14th centuries, but it may have been re-occupied in the 17th century.