World’s fairs were a popular and at the same time very complex feature of the era between 1850 and 1930. They were aimed at the promotion of crafts and industry, while they also wanted to edify and entertain. They served as gigantic shows demonstrating the state of industry, agriculture, arts and sciences in the whole world at the given time. A world’s fair was always a good opportunity to show the world the face of the organizing country it considered characteristic and worthy of display. All these aspects were highly relevant concerning the World’s Columbian Exposition, which was organized in Chicago in 1893 to commemorate the 400th anniversary of the discovery of America by Christopher Columbus. The fair consisted of two sections: the White City and Midway Plaisance. The former received its name from the gleaming white colour of its Beaux-Arts buildings; conforming to a unified general scheme, they had been designed to impress both domestic and foreign visitors with a dignified, serene appearance that suggested solid strength as well as refined grandeur. America wanted to show the world that having joined the leading nations in industry, agriculture and business, it had now come of age and was ready to take its place in the community of nations as Europe’s equal in culture and the arts. Midway Plaisance, on the other hand, was born due to a dual consideration. Anthropology as a scholarly discipline was accorded great attention in the fair, and a special area was assigned here to the display of foreign nations and peoples. In the present case this was combined with amusement, which always played a significant role in world’s fairs. 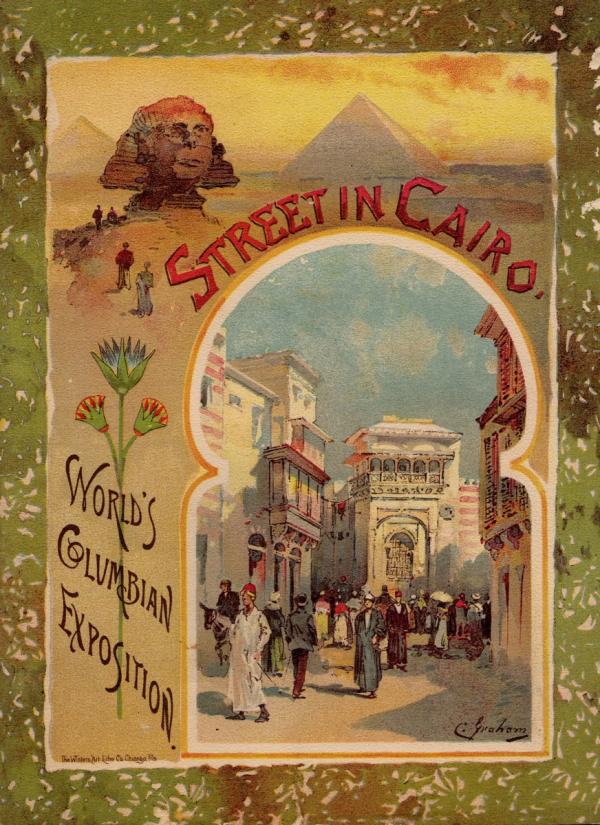 It was on Midway Plaisance that within the framework of the exhibition of foreign populations and their cultures Cairo Street was realized. The basic idea was not new; what created a real sensation in Chicago was the high level of quality of execution. In accordance with an idea widely popular at the time, Cairo Street was not erected as a faithful replica of any particular street in Cairo in toto but combined 26 distinct buildings of Arab-Islamic style – some of which were more or less accurate copies of well-known monuments or of their parts – into a harmonious whole reproducing the city’s atmosphere and giving the illusion of a real street in the Middle Eastern metropolis.

Fully aware of the importance of a world’s fair for propaganda purposes, Egypt wanted to participate on an official level in the Chicago fair but was not in a position to do so owing to her precarious economic situation. Thus Cairo Street was realized as a private project by manager Georges Pangalo, who succeeded in securing the cooperation of Max Herz. Chief architect to the Comité de Conservation des Monuments de l’Art Arabe, the official state agency responsible for the preservation of Arab-Islamic monuments in Egypt, Herz at the time was the foremost authority in the field in question. In addition to the indispensability of Herz’s professional expertise, Pangalo was convinced that Herz’s official position with the Egyptian government would give additional standing to his project. In the project office he set up in Cairo, Herz employed the Austrian architect Eduard Matasek to assist him in the preparation of the necessary plans. Most components of the buildings were produced in Cairo and then shipped to America, where they were assembled under the supervision of a Chicago architect especially engaged by Pangalo. Herz himself, who travelled to Chicago for this purpose, supervised the final stage of the works. The creation of an authentic atmosphere also required genuine Cairene inhabitants along with such typical features of the Cairene street scene as camels and donkeys. They would then participate in social events characterizing Cairene life such as wedding processions, among many others. The great sensation of earlier similar ventures, the danse du ventre, could not be missing from Cairo Street either. It was easy to hire authentic Cairene types but Pangalo experienced unexpected difficulties in securing the services of female dancers. 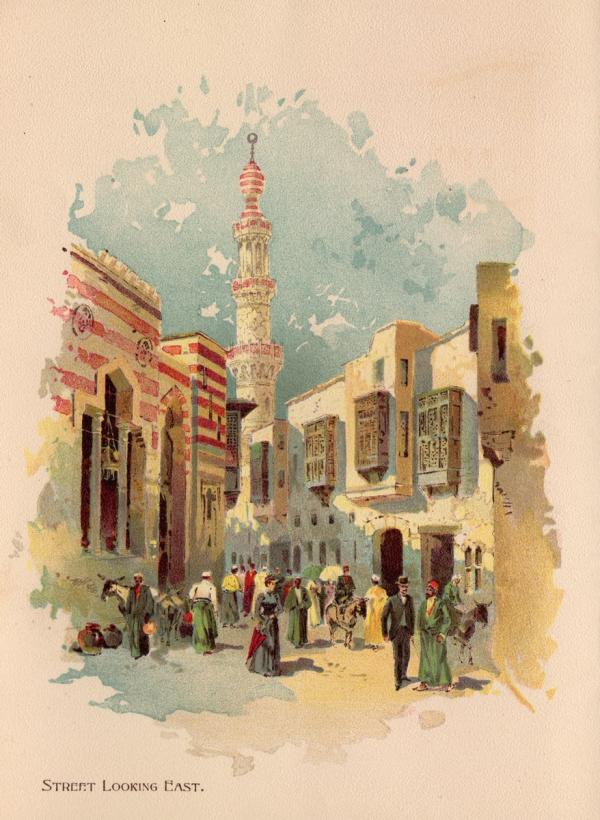 Cairo Street consisted of 26 edifices, including a mosque, houses, shops, and a sabil-kuttab; this type of building, characteristic of premodern Cairo, combined a public water dispensary below and an elementary school above. A replica of Abd al-Rahman Katkhuda’s picturesque sabil-kuttab, one of the landmarks of Cairo’s Old City, stood in the centre of Cairo Street. The beautiful mosque was a copy of Qayitbay’s funerary mosque in the Northern Cemetery except that its minaret was an exact replica of the corresponding part of the fine mosque of Abu Bakr ibn Muzhir in the Old City. There was also a caravanserai, an important type of premodern Cairene architecture, which included a number of interior booths. Altogether there were over 57 booths and more than 50 stands selling authentic Egyptian products in the Street.

Cairo Street was a big success, both with specialists and the general public. This appeared clearly in the number of paid admissions: all participants in the project realized very high profits. The belly dance, the danse du ventre, which was looked upon as risqué by contemporary society, caused tremendous excitement so that people flocked to see it; the negative attitude of some newspapers only served to heighten the attraction. In general, a visit to Cairo Street was seen as a substitute for a journey to Cairo for those who could not afford it. This was a significant aspect in an era when travelling became fashionable and more and more popular. The educational gain of meeting people with whom one normally did not come into contact was also important.

It was around 1996 that I became interested in the life and activities of Max Herz (1856–1919), who had been responsible for the preservation of Arab-Islamic – and later also Coptic – monuments in Egypt between 1890 and the end of 1914. The importance of this post is highlighted by the circumstance that Cairo is the city with the richest heritage of Arab-Islamic architecture in the whole world. In addition, Herz was the first director of the Museum of Arab Art (present-day Museum of Islamic Art in Cairo), and it was one of the new results of this former project that it was again Herz, who founded the Coptic Museum too – both museums are the foremost institutions of their kind in the world. He was also active as private architect, erecting buildings in various styles but personally preferring the Neo-Mamluk style. My research resulted in a monograph published by the Institut Français d’Archéologie Orientale in Cairo in 2009: “Max Herz Pasha (1856–1919): His Life and Career.” It may be mentioned in this context that, owing to his important post, Herz closely collaborated with many scholars all over the world, among them with Max van Bechem.

Cairo Street first came to my notice while working on Max Herz. In my monograph, I discussed it briefly on the basis of material available at the time of writing. However, I had to realize fairly soon that a considerable amount of material was scattered in various sources on the Columbian World’s Exposition, which to locate and peruse seemed to need special efforts. Thus this new project developed with the aim of writing an independent monograph on Cairo Street. I tried to collect and peruse practically all available material on the subject which promised significant yields in three separate fields at least: the history of preservation of Arab-Islamic monuments in Egypt, American history, and Orientalism in Edward Said’s definition. The English text of the monograph is ready now and is currently undergoing stylistic revision with the support of the Max van Berchem Foundation. In addition to the general advantage to be gained from new information per se, there are two factors that lend this study uncommon interest. First, the sheer quantity of new, systematically arranged data for the first time gives a comprehensive picture of this remarkable enterprise. Second, the examination of Cairo Street within the context of the World’s Columbian Exposition as a whole yielded completely new insights into its true nature and meaning, which considerably modify, often even contradict, generalizing statements to be found in scholarly literature and which are based on one-sided, exaggerated interpretations of Saidian Orientalism. The critical approach pioneered by Edward Said has reached important conclusions and has enriched our knowledge with remarkable new results. Yet research based on Saidian Orientalism alone leaves out of consideration the extremely complex and multifaceted nature of the Columbian World’s Exposition as a whole, where the sublime and the ignoble, serious scholarship and popular amusement, refined art and coarse entertainment peacefully coexisted side by side – and not infrequently interacted with one another. And it was this last aspect that made the entire World’s Fair a truly unique experience.