GARDENS, LANDSCAPE, AND VISION IN THE PALACES OF AL-ANDALUS | 1996

A grant from the Fondation Max van Berchem has allowed me to finish the writing and illustrations of a book (forthcoming from the Pennsylvania State University Press) which addresses the connected issues of agricultural and aesthetic space and the framed perception of both from the 8th through 15th centuries.
The book begins with a discussion of the systems of land tenure, taxation, crop rotation, and agriculture by contractual agreement in Islamic Cordoba (8th-10th centuries) and describes the "green revolution" recorded in agricultural calendars, manuals, and botanical treatises. These Arabic sources record data accumulated in the preceding centuries and continue the tradition of agronomic literature already well developed in the Roman period. In addition to sponsoring such scientific tracts, the royal house collected exotic botanical specimens which were domesticated in experimental gardens. These reflected the more practical interest of the ruler (and ordinary landowner) in the utilitarian landscape whose output was increasing rapidly due to the installation of intensive hydraulic systems, the improvement of agricultural techniques of fertilization and propagation, and the importation of new and more adaptive plant species for cultivation. The landscape transformation was deeply affecting economically and socially and had a profound impact on the built environment. 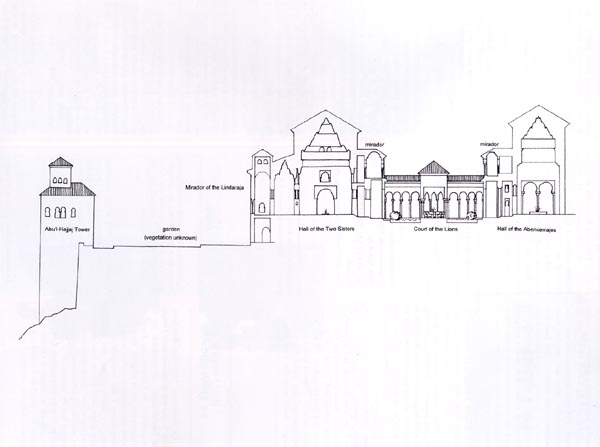 The Mirador of Lindaraja's position and view

Islamic gardens are traditionally regarded as paradisiac constructions, the cultivated garden beds with water channels seen as an earthly reflection of paradise which the Qur'an describes as a "garden watered by four streams". However true this may be for later Timurid and Mughal gardens, the texts from al-Andalus indicate that the earliest palace gardens were primarily environmental, economic, and political constructs and that paradisiac symbolism did not develop until the 11th century (or later) when gardens received tombs. The classic quadripartite, cross-axial form of the garden was not derived from the four rivers described in the Qur'an but from the organization of the working landscape. The garden's decorative water channels were aesthetic transformations of utilitarian irrigation canals; ornamental pools paralleled the collection and storage of water in reservoirs; and fountains with vertical jets represented the acquisition of water through wells and waterwheels.
The value attached to the productive landscape was reflected in the sprawling garden palaces with numerous reception halls that gazed upon nature. Architecturally, the change began at Madinat al-Zahra' in 936 with the selection of a new kind of building site: the palace was situated away from the city and was raised above the surrounding landscape, its halls placed on stepped terraces that overlooked extensive gardens. The direction of vision and the place of the viewer in the halls were fixed by windows and pavilions that were miradors, literally places for seeing. The views extending from them encompassed the cultivated countryside that was the economic foundation of the kingdom, and the privilege of having such a view was a sign of ownership and stewardship.
The royal palace gardens of Cordoba expressed an optimistic political ideology that placed the king above and at the center of the garden and metaphorically his kingdom. Later, when Islam was in political retreat in the small but prosperous kingdom of Granada, the patrons of architecture still retained the forms and motifs of the earlier golden age. For example, the Alhambra's mirador overlooking the Lindaraja garden refined the already extant vocabulary of gardens, fountains, and miradors (see figure). The only significant innovation was the extensive program of thirty-one poems inscribed on the palace walls. These were unusual because their content was secular and because twenty-five of them described directly the halls which they adorned. In the Lindaraja Mirador, the verses refer to the gardens, miradors, and the positioning of the sovereign viewer; thus while the agricultural texts of earlier centuries record landscape transformations and the value placed on the land, the Alhambra poems explain the highly charged meaning of the mirador's view and the complex metaphorical relationship between the viewer/king and garden/kingdom.