In June and July of 2013 I studied more than 50 mosques and Muslim tombs in 38 towns, cities, or Muslim autonomous counties of eleven provinces or autonomous regions of China. The number is only a small fraction of the more than 30,000 mosques in China today, for there is no large city and hardly a town without a mosque. The majority of China's mosques were built or rebuilt after 1980 and represent the open practice of Islam. Contemporary mosques in China share much with mosques across the globe, and the international communities who worship in them attest to the fact that they provide a comfortable worship environment as well as communal space for local Muslims.

My research this summer focused on China's old mosques, those that both remain at sites with long, documented histories of Muslim architecture from the Ming dynasty (1368-1644) or earlier and retain buildings or at least ground plans from the same period. About 70 that fit this description survive. The most famous of China's old mosques date to the Song (960-1279) or Yuan (1271-1368) dynasties and are in the southeastern coastal cities Guangzhou (Canton), Quanzhou, Hangzhou, and Yangzhou; or are in the large tourist cities Xi'an and Beijing. The purpose of this trip was to see less well-known mosques in other parts of China, as well as a few mausoleum shrines (qubbah). The research trip focused on mosques in three regions: along the Grand Canal; on the Central Plain, specifically Hebei, Henan, Shanxi, and Shaanxi provinces; and in the region where Gansu Province, Ningxia Hui Autonomous Region, and Qinghai Autonomous Region meet. My research was greatly enhanced by Sheila Blair and Jonathan Bloom, Norma Jean Calderwood Professors at Boston College and Hamad Bin Khalifa Professors at Virginia Commonwealth University, who traveled with me for two weeks of the trip.

The Grand Canal is one of China's greatest engineering feats. Opened in the Sui Dynasty (581-618) by connecting pieces of earlier canals, the Grand Canal joined China's two greatest rivers, the Yangzi in the South and the Yellow River in the North. Thereby southeastern coastal cities could transport goods to and from Beijing in the north, and the Yellow River could carry goods to westernmost China where they could be delivered to or taken from land routes along the Silk Roads. When land routes were impassable, merchants could still travel from Indian ports to China by the sea and send good as far north as Beijing by water. Muslim merchants lived in towns along the eastern coast and up and down the Grand Canal. Still today every major town along the Canal in Hebei and Shandong provinces, including, from south to north, Jining, Jinan, Linqing, Dezhou, Qingzhou, Cangzhou, and Botou all have mosques that retain old buildings or new structures on old sites. Between Tianjin and Beijing, both self-incorporated cities along the Canal route, are counties with such large Muslim populations that they are designated Hui (Chinese Muslim) autonomous counties.

Many of the most splendid mosques are in the largest cities along the Canal. Great East Mosque in Jining, Shandong Province, is one of them. Its front gate faces the canal, thus giving it the nickname "Great East Mosque along the Canal." The Muslim population in Jining dates to the Yuan dynasty (1271-1368), but no Jining mosque has a history earlier than the Ming period. A stele records the founding of Great East Mosque in the period 1454-1464 with expansion and repairs under the Kangxi (r. 1662-1722) and Qianlong (r. 1735-1796) emperors. Today all the buildings date to the Qing dynasty (1644-1911). Eight of them stand along an east-west line that begins at a three-entry, white, stone gateway of the Chinese form known as pailou, continues through two more gates, and then leads to the three-part worship complex that takes a cruciform shape with its mihrab at the back (fig. 1). A paved path behind it leads to a Wangyuelou (Tower for Viewing the Moon) and a wooden ceremonial gateway at the back end of the enclosed mosque area. Lecture halls, a hall for ablutions, and administrative offices and residences complete the mosque. No minaret is found there. There is no explanation why today some Chinese mosques have minarets, some have pavilions for viewing the moon, presumably during Ramadan, some have both of these structures, and some have neither. 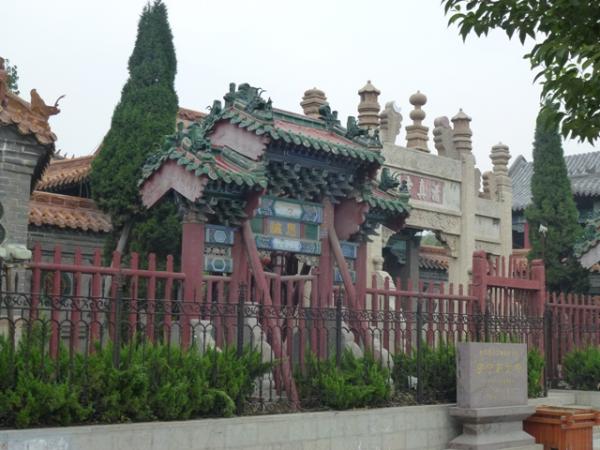 A splendid mosque along the canal survives in Botou, Hebei province, a much smaller town today than in the fifteenth century. The mosque attests to a flourishing period of Muslim communities when trade along the Grand Canal was at its peak (fig. 2). Botou Mosque was founded in 1404 by Muslims who moved north along the Canal following the transfer of the Ming capital from Nanjing in the south to Beijing in the North at the beginning of the fifteenth century. The mosque has more than 4000 square meters of buildings on a site that at its greatest expansion in the first half of the seventeenth century was 14,600 square meters. Built on an east-west line that leads to the mihrab, the Botou mosque has a minaret with a hexagonal, ceramic-tile roof typical of a Chinese pavilion. The prayer hall is enormous, an 1144-sq-m building of 44 m in depth, a dimension that extends to 55 m when the front porch and mihrab are added. White marble balustrades of the kind seen in Chinese imperial architecture such as the Forbidden City line the approaches to buildings. Other noticeable Chinese features are the circular and octagonal windows cut into the Wangyuelou that stands behind the mihrab. There is also a small garden. Eighteen stele record the history of the Botou mosque, a larger number than exist for most Chinese mosques today. The use of marble and well-documented history confirm the high level of local patronage in the Ming period. 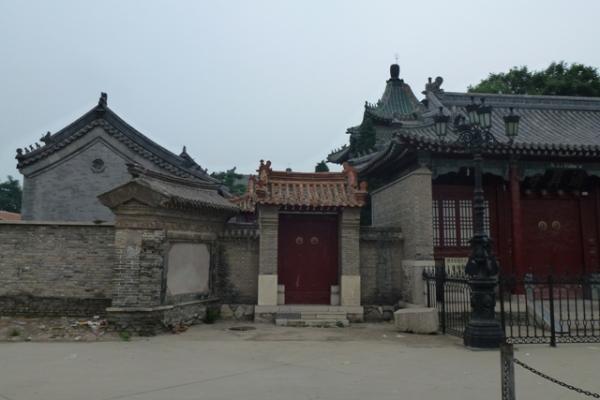 A search for old mosques in north central China, between the Grand Canal and western provinces, yields some of the least known and historically most significant mosques. This region includes Xi'an whose internationally famous mosque perhaps has eclipsed the importance of the others. The fame of Huajuexiang Mosque in Xi'an is due to its patrons. They include emperors of the Ming dynasty as well as the Muslim seafarer Zheng He (1371-1433). The Nanjing Mosque is less well known, but it had the same patrons and today retains an imperial placard and carvings that reflect its fifteenth-century grandeur. The North Mosque in Xuanhua, also of cruciform plan, is a grand mosque whose oldest buildings date from the early eighteenth century and with a minaret between the entry gate and worship hall, is the one in Hebei (fig. 3). Shanxi's most distinguished mosques are among the oldest in central China. They are located in the provincial capital, Taiyuan, and in the large city Datong in the far north, just south of the Great Wall. According to stele, both Shanxi mosques were founded in the Tang dynasty, although more credible information places the founding of Datong Mosque in 1324 with the oldest architecture at the site from the Ming dynasty. Henan has mosques with Ming-period buildings and older histories in Qinyang, Kaifeng, and a village adjacent to Kaifeng named Zhuxian. The Qinyang mosque is announced by a gate that was repaired at the end of the twentieth century. Once behind it, one stands in a worship hall laid out according to a thirteenth-fourteenth-century arrangement in which the majority of interior pillars have been eliminated. Painting on wooden members and the ceiling brighten an otherwise dark interior space. The mihrab is covered by the highest dome I have seen in a mosque in China. 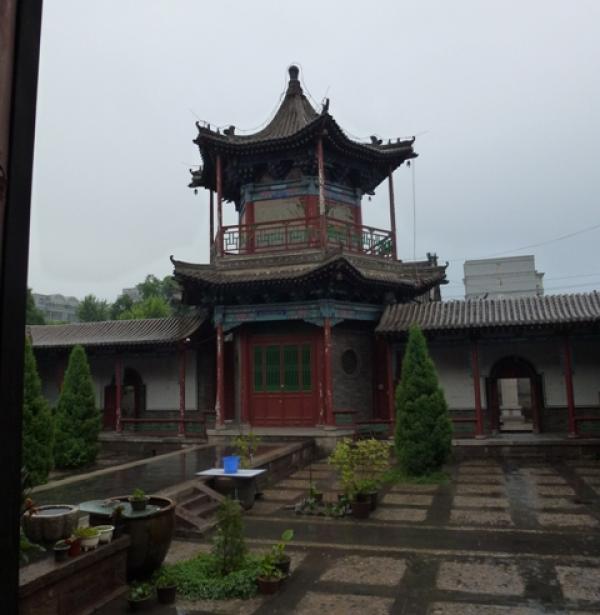 A very different kind of architecture is found in the third region of China visited this summer, the Muslim autonomous counties of Gansu, Ningxia, and Qinghai. The terrain is more mountainous than the locations of most Chinese mosques, but the more fundamental difference is that even though some mosques have earlier histories, they reflect Qing dynasty (1644-1911) building practices more than those of the Ming period or earlier. These are also communities in which new mosques stand on almost every street; in some cases, such as the town of Linxia in Gansu province, former known as Hezhou, it is common for several mosques to be on the same street. The Na Family Mosque (fig. 4) and Tongxin Mosque in Ningxia are among those with old buildings or that retain old plans. The first today functioning as a community center as much as a mosque, for local worshippers pray at a nearby new mosque, and the second under renovation, their histories are evidence of the well-documented history of this region as a location of multicultural war and peace in the nineteenth century. Of more fascination for an art historian is the relief sculpture on mosques and qubbah in Ningxia, Gansu, and Qinghai. Sculptural relief set into standard Chinese screen walls presents a Sino-Islamic iconography that includes floriated Arabic and Persian inscriptions alongside Chinese characters, elements of the accouterments of a Chinese scholar such as writing brushes and ink stands with copies of the Qur'an labeled in Chinese, and floral and vegetal motifs from peonies to pomegranates that could be found in purely Chinese or purely Islamic decorative programs. 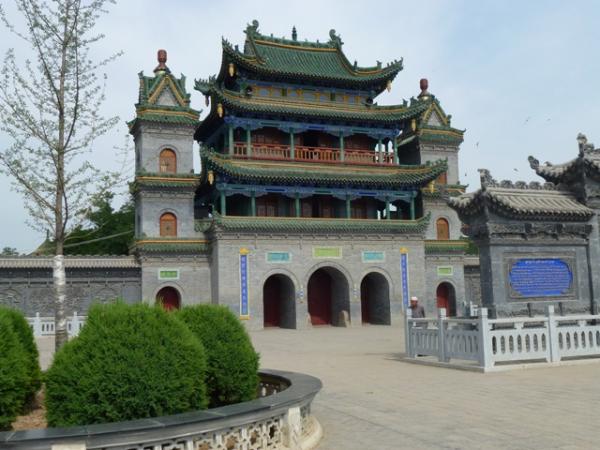 Almost every mosque visited this year was under renovation or had recently been renovated. Each one also had affiliated clergy or lay leaders. In China today the old mosques are as much historical relics as places of worship. Year-by-year it will become more challenging to look beneath the new paint, carving, and brickwork to identify the fourteenth- and fifteenth-century architecture and decoration. I was thus extremely grateful to have the opportunity to study so many mosques during the summer of 2013.

Information gathered on this research trip will discussed in more detail in a book entitled China's Early Mosques, to be published by Edinburgh University Press, in 2015.