In July 2001 we completed the fifth season of the architectural survey and documentation project at the seventeenth century Ottoman fortress of Seddülbahir, which is located on the European shore of the Dardanelles. We also completed a second year of our architectural survey at Kumkale, the Ottoman fortress on the opposite Asian shore of these straits. The project is directed by Lucienne Thys-Senocak from the Dept of History at Koc University in Istanbul. It is a joint research effort between Koc University's department of History and Istanbul Technical University's Geodesy and Photogrammetry Departments. A grant from the Fondation Max van Berchem supported the project from 1999-2000. A second grant from the foundation will allow the team to complete the survey project by August 2002. 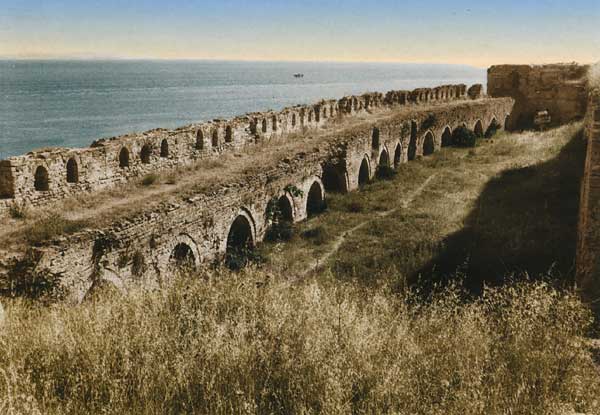 The Ottoman fortresses of Seddülbahir and Kumkale were built in the mid-seventeenth century at the entrance to the Dardanelles by the Valide Turhan Sultan, the mother of the Ottoman sultan Mehmed IV. Initially the fortresses were constructed as part of the Ottoman defense against Venetian naval invasions into the Dardanelles during the long war over Crete; since that time they have served the Ottoman defense against a variety of enemies who have coveted either the strategic outlet to the Aegean or a convenient sea access to the Bosphorus and the capital of Istanbul. Both fortresses were instrumental in the Gallipoli campaign of World War I and severely damaged by artillery fire. After World War I and the withdrawal of French and British troops from the Gallipoli region, Seddülbahir and Kumkale were returned to the Ottoman government. Until the spring of 1997, Seddülbahir was maintained as a Turkish naval outpost. Kumkale is still operating as a naval base and is under the jurisdiction of the Ministry of Defense.

Once the initial documentation phase of the site was completed we began, in 1999, to prepare a restoration proposal for Seddülbahir as the site is exposed to the severe weather conditions at the entrance to the Dardanelles and is also vulnerable to damage from earthquakes and vandalism. In order to produce a restoration proposal for the Canakkale Restoration Board, we were required to select a section of the fortress and take very detailed measurements (1:20) of this section, draw the individual stones that comprised the wall and produce a conceptual plan for the preservation of this section. We concentrated our efforts on the northwestern tower and wall of Seddülbahir because we had ample archival and pre-World War I photographs of this section. Stone, mortar, metal and wood samples were also taken from the northwestern section as well as other parts of the fortress for laboratory analysis. These samples are being used to determine the various phases of rebuilding that the fortress has undergone since the 17th century. The material evidence collected in the field work, along with the prodigious amount of archival evidence found both in Istanbul and abroad, allows us to establish an accurate building and repair chronology for Seddülbahir and will facilitate the future preservation and restoration measures that urgently need to be undertaken at the fortress. 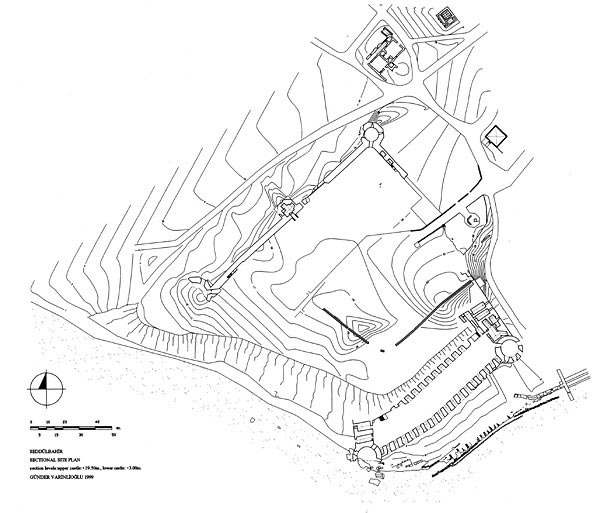 In addition to the fieldwork I have been collecting sources related to these two Ottoman fortresses built by Turhan Sultan since 1996 both in the Ottoman archives in Istanbul and Ankara and in libraries and archival houses throughout Europe. The archival sources have been quite diverse and range from Ottoman repair records (tamirat defterleri), the majority of which are in the Basbakanlik Archives in Istanbul, to European and Ottoman chroniclers' descriptions, drawing and engravings of the site, to wartime photographs and memoires of the Gallipoli campaign. Furthermore, in 1999 we developed an extensive oral history project which involves the current day residents of Seddülbahir and has given us insight into the more recent history of the fortress as well as some the challenges we will face while restoring the structure. The fascination that this region of the Gallipoli peninsula held for travellers seeking the location of nearby Troy or finding refuge from bombardment during the Gallipoli campaign of World War I has generated a tremendous amount of descriptive and visual documentation of both Ottoman sites. Archives in Britain such as the Imperial War Museum and the Public Records Office have been particularly rich in photographs of Seddülbahir because the fortress is located on Cape Hellas, the site of a major naval invasion conducted by the British. Kumkale, on the opposite shore was captured and occupied by the French navy during World War I; the military and naval archives at the Chateau de Vincennes have been particularly useful for understanding the role Kumkale played both before and after World War I. Kumkale, with its location at the mouth of Homer's famed Scamander river, has caught the attention of travellers for centuries and was commented upon frequently by archaeologists of the region such as Schliemann.

The Ottoman fortress at Kumkale was built from 1656-59 by Turhan Sultan - the same time as Seddülbahir - and is located directly across from the European fortress on the Asian coast of the Dardanelles. It is still an operating naval base hence no plans of the Ottoman structures had ever been made. After three years of negotiations with the Turkish Ministry of Defense and the Ministry of Culture our team was granted the permission to survey Kumkale in the summer of 1999. Due to the tragic earthquake that occurred in western Turkey in August, 1999 we were unable to begin our initial surveying work at the fortress until November 1999. In two separate campaigns, during the months of July 2000 and July 2001 we spent a total of eight weeks season conducting an extensive architectural survey and documentation of this second Ottoman fortress. Our three-year protocol with the Ministry of Defense insures that our team will have access to the site through July 2003. 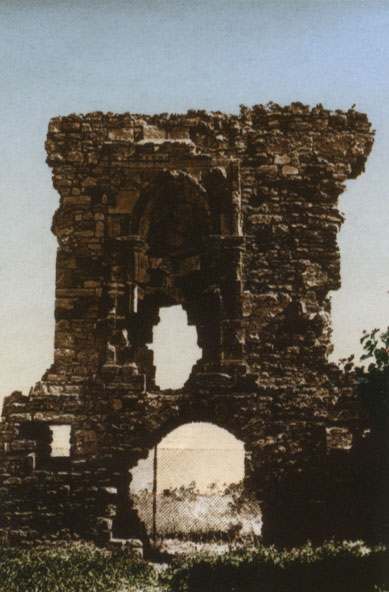 The remaining mihrab from Kumkale mosque (2000)

Both the 2000 and 2001 summer seasons at Kumkale were very successful. We were able to complete much more than we had hoped largely because our new Leica Global Positioning System (GPS 300) and reflectorless total station (LEICA 1800) greatly facilitated the initial surveying and topographical work. We also brought with us three years of experience with Ottoman fortresses acquired from our surveying work at Seddülbahir. We have conducted a very thorough topographical and architectural survey of all structures at the Kumkale naval base which date to the Ottoman period. Additionally we conducted a topographic survey and detailed epigraphic documentation of more than 250 tombstones remaining in the Ottoman cemetery at Kumkale. A pottery survey and topographic map was made of the area immediately surrounding the fortress, the site of the Old Kumkale village, which was moved eight kilometers, inland during World War I. Finally, as at Seddülbahir, we conducted an oral history project in the new village of Kumkale to understand the more contemporary developments that had transpired in this region and the many ways in which the Kumkale fortress and cemetery has been remembered by those who live in these environs. We are continuing to work with local officials to develop plans for the preservation of the fortress's rich Ottoman cemetery, which lies just outside the area supervised by the naval base. Both the cemetery project and the oral history project at Kumkale have become substantial research projects in and of themselves.

We have enlarged our team with an additional architect who has experience with implementing preservation projects in Turkey, an Ottoman historian specializing in epigraphy and prosopography, and two additional surveyors; we now number fifteen. After five years of working together on this project our team has begun to work very efficiently and productively and we are now considering expanding our work to include other Ottoman fortresses in the region. We now have a substantial database, which we are organizing with a GIS (Geographical Information Systems) program. Our website is still under construction but we expect to launch it by March 2002. The address is : www.seddülbahir-kumkale.com. It is due to the generosity of the Fondation Max van Berchem that we have been able to realize so many of the goals of our project. On behalf of my team I would like to express our thanks for the support the Fondation has given to the Architectural Documentation and Survey of the Ottoman fortresses of Seddülbahir and Kumkale.

A selection of the completed architectural plans has been presented and published in the proceedings of the annual archaeological symposium held each May by the Turkish Ministry of Culture; a more extensive set will appear in my book Turhan Sultan: The Architectural Patronage of a Valide Sultan, which is currently under review at Ashgate Press. Additional conference presentations and publications which have resulted from the support of the Fondation Max van Berchem are as follows:

"Defending the Dardanelles: The Ottoman Fortresses of Seddulbahir and Kumkale", The American Research Institute in Turkey, Istanbul (May, 2000)

L. Thys-Senocak, "The Surveying and Documentation of the Ottoman fortresses of Seddulbahir and Kumkale (in Turkish)" Cogito, Fall 2001

Turhan Sultan: The Architectural Patronage of a Valide Sultan, (currently under review by Ashgate Press)

"French Engineers and Ottoman Fortresses" (to be submitted by Feb. 2002 to Revue Historique des Armées, Paris)

"The Cemetery of Kumkale: Ottoman Epigraphy and Burial Practices in the Troad" (in preparation, co-authored with Hasan Karatas)