Medieval Islamic Textiles in Iberia and the Mediterranean | 2015

MEDIEVAL ISLAMIC TEXTILES IN IBERIA AND THE MEDITERRANEAN

The traditional approach to the study of medieval textiles in the Iberian Peninsula has sustained that the vast majority of the extant objects found in Iberian contexts was woven in al-Andalus and that when these objects crossed Iberian boundaries, they became inherently exotic and foreign signifiers, marks of "Otherness". This narrative also maintains that Andalusi artisans designed and wove while Iberian consumers received the visual information passively and that technical sophistication derived from Andalusi labor in Hispano-Muslim territories while "folkloric," popular, or less appealing products reflect "mudéjar" hands (mudéjares were conquered Muslims who lived in Christian jurisdictions). The dominant discourse outlined above is based on problematic suppositions that do not distinguish between the objects' desirability as refined items of trade and their modern academic perception as exotic indicators of Otherness. Indeed, they conflate the terms "foreign" and "exotic," which denote amazement driven by a lack of familiarity, with "refined" and "coveted," which indicate appreciation and desirability based on discernment. Equally problematic is the fact that there is no established distinction between the products of palatine workshops (tirâz), destined for the court and its needs, and their imitations, which were intended to enter the open luxury markets. The complexity of textile manufacture, trade, and consumption has remained unacknowledged in medieval Iberian studies.

The Medieval Islamic Textiles in Iberia and the Mediterranean Research Project seeks to establish a new methodology that recognizes the place of the Iberian Peninsula within the greater world of medieval Islamic textile trade. We acknowledge the immense influence of the weaving traditions of the Islamic Mediterranean and the Central Asian silk route upon textile production, trade, and consumption in the Iberian Peninsula. We start from the premise that extant textiles in Iberian contexts must reflect the diversity so clearly expressed in the historical documentation and literary evidence, which attests to a high volume of textile goods that flooded Iberian markets from these areas. Our project intends to ascertain the cross-Mediterranean connections or reveal the Andalusi origins of surviving objects in a pioneering integration of cross-disciplinary analyses.

Another objective is to recognize and explore the multiplicity of Iberian contexts through which the textiles moved and settled, and ultimately, the specificity of their cultural meanings, highlighting the vital role of sumptuous textiles in the production of cultural identities. For this purpose, we propose to drop old labels and preconceived notions, and to start anew from the perspective of the materiality and consumption of medieval Islamic material culture. It is a central principle of this effort to look both inside and outside of the Iberian Peninsula to refocus the lens through which we study these objects. It is equally important to consider the buildings, objects, and bodies, not to mention the beliefs, ideas, and modes of transmission of taste and technical knowledge, which provide a context for the uses and meanings of medieval Islamic textiles in the Iberian Peninsula.

Thanks to the generous support of the Max van Berchem Foundation, we have begun to lay the foundation of this long-term project with great success. In order achieve the greater art historical and ethno-historical objectives outlined above, our research program has begun by tending to a series of sorely-needed basics. Throughout the past year, we have been working to complete an Arabic epigraphic corpus of extant textiles in collections across the United States and Europe; to build an extensive database of objects currently housed in museums, church treasuries, and private collections - many of them of very difficult access and rarely ever published - and lastly, amassing documentary, photographic and historical information that will allow us to complete a long-overdue reevaluation of nineteenth and early-twentieth century textile collecting practices and their influence upon the field of medieval Iberian studies, with an especially keen eye on object precedence and dispersal.

Our work leading to the Medieval Iberian Textile Epigraphic Workshop (Seminario Epigráfico Textil: Tejidos Medievales en Iberia y el Mediterráneo)[1]?which took place at the Museo Arquelógico Nacional (Madrid) on June 29-July 3rd?entailed a combination of collaborative efforts with no less than twenty international museums and institutions, the creation of an image data bank with epigraphic material in more than forty collections, a complementary digitized bibliographic archive, and a strong dose of detective work tracking provenance records in nineteenth-century and early twentieth-century acquisition registers, sale catalogues, sample books, and art historical and archaeological journals. Together, these efforts have formed the core of a future database, which we envision as a public, permanent, and ever-growing online resource for the advancement of Islamic textile studies. The design and activation of the database and online presence will be the focus of our 2016 work schedule, in addition to the preparation of a two-volume epigraphic corpus and critical studies publication. 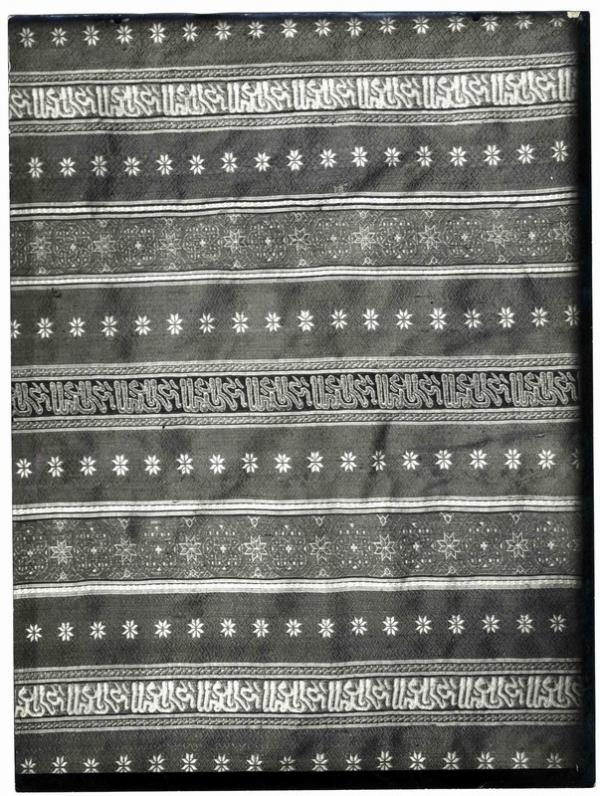 The celebration of the Textile Epigraphic Workshop, the first of its kind focused exclusively on Medieval Iberian textiles, afforded us the unique opportunity to view the large sample of works with Arabic inscriptions as a single corpus, rather than as a varied collection of dispersed objects. From the exercise of viewing the material through the unifying lens of its epigraphic richness emerged an entirely new perspective on important groupings of previously unrecognized related objects (through different combinations of epigraphic content, calligraphic styles, weaving techniques, relationships to monumental epigraphy, and even technical mistakes). We are currently focusing our research on these areas of inquiry.

Lastly, the support of the Max van Berchem Foundation has made it possible for our team to meet an essential goal of our research project: already we have been able to leave a visible legacy in various Spanish textile collections with important, but understudied or largely undocumented medieval Islamic objects. We have been able to supply valuable information, epigraphic details, and high resolution images to enrich the documentation of various unpublished collections. In many instances, we discovered epigraphic information in faded, overlooked, or poorly understood objects. We continue to work closely with our colleagues in collaborating institutions not just to advance but to transform the field of medieval Islamic and Andalusi textile studies.